When Shadrach left the furnace

All Babylon was ablaze,

Slashing and clawing from walls

Of yellow brick, from palm fronds,

From the high sun that echoed

Desire. His wife had begged him

To bank his faith.   In her eyes, coals

Were blown white by joy.   Children

Hugged his thighs, their innocence

He stumbled to wash soot off

At the river bank: the waves

A wall of friends danced and roared,

Their faces burning with awe.

Driving uphill to work on

A morning dusted with snow,

I see I am addicted

And white on tin and asphalt

As thin and evanescent

As if a cold light shone through.

I passed the old broken tree

Whose second growth of branches

Made it seem woolly, gaily

Transformed to a nest of rays.

The blue sky was enameled

By the brightness spread beneath.

Glimpsing, I wanted to live

By the gleam of the furnace light

Behind the wakened clapboards:

The ecstatic veiled in snow,

The world consuming itself.

“When I heard the Dalai Lama would be appearing at the College, I recalled Buddha’s great Fire Sermon, which says that all of existence is afire, impermanent; that brought to mind the bible story of Shadrach and his friends, who were thrown into the fiery furnace but walked out unscathed. I wondered what it would be like to see everything around you burning, while carrying on ordinary life.”   —Paul Hamill

Former IC associate provost Paul Hamill is Ithaca College’s director of academic funding and special programs, and the current Tompkins County poet laureate. His published works include narratives, meditations, monologues, and poetry collections. He is the parent of Stephen Hamill ’98 and Katie Hamill ’05 and stepparent of Christopher Colongeli ’03. In this issue he has another poem, "The Students of Dissection Praise the Donors of Bodies." 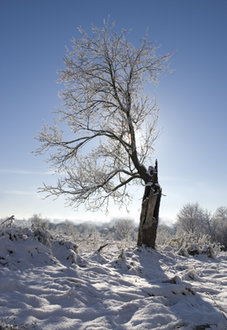