It takes teamwork to build a rowing center.
By W. M. Hankle

About 100 students fill the facility and spill out the doors, chatting with one another as they get ready for crew practice. And once practice begins . . . look out. Dodging equipment, backpacks, rowing machines, and each other, groups of oarsmen and oarswomen take turns moving themselves and their boats toward the water.

Last fall, Ithaca College unveiled a $2.6 million initiative to build the Robert B. Tallman Rowing Center, which will include the new Ward Romer Boathouse, a stone patio, and a landscaped waterfront. The College is supporting the project to the tune of $1.6 million, and a campaign to raise funds from alumni, parents, and friends is under way to supply the other $1 million.

The buzz surrounding the new boathouse goes beyond the simple addition of square footage and a second bathroom (the current facility has only one). The new facility will be large enough to house all equipment inside. It will have a changing room and showers so that students can practice, then get ready for class, their jobs, or their internships. And — of critical importance — it will provide a larger space for winter training, allowing both teams ready access to weights, mats, and rowing machines.

“The current boathouse is the original boathouse built shortly after the program started in 1968,” says Dan Robinson, who rowed as a student and has coached at Ithaca since 1979. “At that time, the facility easily accommodated the 16 people and two boats that comprised IC crew, but we’ve had tremendous growth since then, and our program is thriving.”

When then IC president Howard Dillingham approved the creation of varsity crew, funding the program in large part fell to the students who requested the team be formed. As a result, the program was built piecemeal and on a shoestring budget, relying heavily on donations from alumni to provide for the team’s needs. Today, IC crew enjoys increased support from the College, and alumni continue to play a huge role.

“For a lot of people, their first and only crew experience is at the college level, and the bonds formed with your peers and the program don’t end when you graduate,” says Becky Robinson, who’s been coaching the Bombers since 1993, after a stint on the national team. “We’re very excited about this project, not just for our current and future teams, but for our alumni, who are still so connected to the program.”

Crew is the epitome of coordinated, sustained teamwork, and this effort is no different. Be a part of the team that will build the rowing center. Go to ithaca.edu/rowingcenter for ways to contribute and for more information. 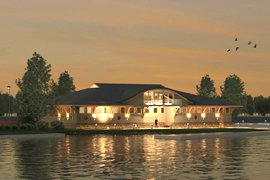 The Ward Romer Boathouse will be large enough to store all equipment inside, allow for an expanded winter training area, and provide lockers, showers, and improved restrooms.