Theatre Arts knows how to throw a party, and alumni really know how to celebrate.
By Barbara Adams

Overwhelming. That was the single word both faculty and returning alumni used again and again to describe their feelings about the Department of Theatre Art’s first all-theater reunion, held October 22–24. The special event brought back 225 alumni and their families — some taking leave from their cur-rent productions — and evoked numerous Facebook regrets from those who couldn’t make it.

“It was a great turnout,” said department chair Lee Bryon. “I literally received a hundred notes from those disappointed they couldn’t attend.”

The reunion was timed to celebrate the recent restoration of Dillingham Center. Byron praised the work of the renovation campaign cochairs Caroleen Feeney ’86 and Larry Hirschhorn ’80. More than $829,500 was raised — far beyond the goal. Jack Hrkach, associate professor of theater history, was moved by the financial generosity of the alumni: “So much was given from so many — particularly from a group of starving artists.”

Byron summed up the purpose of the gathering: “We wanted to show alumni what we’re doing today and hoped they would be proud of the department they came from.” That was the understatement of the weekend: Alumni were elated to see each other and their former professors, reconnect, and make new friends. The three days were a virtual lovefest, packed with joyous and emotional moments.

“I’m delighted at seeing lots of people — really overwhelmed,” said Craig MacDonald ’78. The faculty felt equally overwhelmed, said Hrkach. “The students remembered us; they were so happy to be back. We got so many notes from them, telling stories about how their time here touched their lives.”

And the pride was contagious. Everyone wanted to belong to the theater department that weekend, including President Tom Rochon. “Please accept me as an honorary member,” he implored. Awed by the facilities and the production of the musical Chicago, one alumnus was heard to say, “We were always good, but these students now are amazing.”

Another, Jeremy Levy ’03, was astonished that the dance studio was open to people wearing street shoes. “I can’t believe we’re allowed in here,” he said, stepping gingerly. “We must be pretty important.”

Festivities began Friday evening at a reception that turned into an evening party of its own. On Saturday, scheduled events included touring the renovated facilities in Dillingham, from the new red carpet in the lobby to the labyrinth of offices upstairs. Uncharacteristically, everything was extremely tidy, almost surreally so — even the vast, strangely quiet scene shop with its sign commanding “Work smarter. Work faster.” The dressing rooms were bright and empty; only copies of 1930s photos taped to the mirrors and a sign proclaiming “53 rehearsals and 500 costume pieces later” hinted at the enormous effort to produce Chicago.

Saturday morning, a large and rowdy crowd followed President Rochon through Dillingham’s narrow halls for a series of facilities dedications. Rochon stood atop a wooden box to be seen and heard. “I feel like Boris Yeltsin on the tank,” he quipped. Impressed with the great turn-out for the weekend and the alumni’s commitment to reach Ithaca, the president commented that no one, so far as he knew, had hitched to get here. “Oh yes!” a voice contradicted cheerfully — it was Dave Koneff ’85.

Each of the many dedications was greeted with cheers, tears, and shoutouts. Former chair Richard Clark’s wife was present for the dedication of his classroom, a gift from the class of ’86. Clark had laid the foundation for today’s department, earning the program’s accreditation during his tenure from 1981 to 1987.

The men’s dressing room was dedicated to Daniel MacDonald ’82. After a dozen successful years in Los Angeles, MacDonald, cited as “a natural performer,” had returned to the East Coast. “You can only have so much sunshine,” he’d said. He received a Tony nomination for Steel Pier on Broadway — “I saw it three times!” someone yelled from the crowd. MacDonald, who died of brain cancer in 2007, was remembered in a video his brother and other family members
made of his life and work. “It was a moving event for me,” Byron said, “getting to know who Danny was.”

The women’s dressing room was a tribute to Leesa Noury ’85, invoked as “the next Meryl Streep,” who died at 32 of cancer. Professor emeritus Earl McCarroll (who regrettably couldn’t attend due to the flu) sent memories of Leesa being fitted with an impossibly heavy headdress for one production. (“It was horrible!” one woman called out.) “Let me try to get used to it,” McCarroll recalled Leesa saying. “She did and she looked majestic,” he said, even though she had to use nails to keep it in place.

Unforgettable stories like these accompanied the dedication of each room, and most of those honored, including several retirees, were there to enjoy the moment. A spirited John “Doc” Bracewell, professor emeritus of sound design, pointed out some original sound equipment that is still in the studio, which now bears his name. “Our whole theater department is what makes the magic,” said Eugenia Wacker-Hoeflin, honored ballet instructor and choreographer. “I hope we can continue caring about each other. ”

The piano vocal room was renamed for Skampers, a 40-year tradition of student-sponsored variety shows. One alumna, married and pregnant as a student, confided that her water broke during a Skampers rehearsal.

The studio theater was dedicated to Shakespearean actor and director Earl McCarroll, who “brought the bard back to IC” after a drought of two decades. And in a truly theatrical announcement, acting studios were named in honor of professor emeritus Arno Selco and current chair Lee Byron, both of whom were genuinely surprised and deeply moved. Byron, whose gift was made by Caroleen Feeney ’86, was cited for outstanding leadership since arriving as chair in 1998 — along with his “low-key way of intimidating students to give their very best performances.” Arno Selco’s warm recognition came from the class of ’86, whose spokesperson, Ana Goldseker, credited him with having “tamed a pack of crazed wolves into intelligent, thinking artists.”

Dori Eskenazi Meyers ’84 funded the scene shop, which she called “the hub of the theater department — everybody has to go through it” (though she admitted to being “the only techie to have graduated without having served on a carpenter crew”). Meyers, buoyantly happy, voiced what many were feeling: “I am just awed to be in such great company. We were a community — and still are. This community is always together, whether you’re in the business or not.”

Meyers spoke of the “wonderful transferable skills” she acquired as a theater major, a note that was sounded repeatedly and appreciatively by alumni throughout the weekend, whether they are now in advertising, public relations, design, teaching, or video game development.

Mort Klayman ’46, who had returned to IC to complete his degree after serving as a navigator in World War II, received several job referrals from his department chair. Of three decades spent teaching theater in high school, he said, “I owe my career to Ithaca College.”

Beyond the alumni memories and dedications, the department’s history was celebrated at Saturday evening’s banquet in slide shows and a video produced by associate professor of theater arts Greg Robbins. Former chair Bruce Halverson told tales from the late ’80s, including one about the department’s traditional volleyball game. Professor Arthur Lithgow, then 75, was team captain; he took a heroic leap for the ball and fell. “Omigod, we just killed Arthur Lithgow!” the players yelled. But the doughty actor jumped up and led his team to victory.

The length of the department’s reach was perhaps most striking in Lee Byron’s rededication of Dillingham before Saturday night’s performance of Chicago. The ceremonial ribbon was cut jointly by actress LaVerne Light ’42 and theater production arts major Mimi Rodriguez ’14 — whose theater degrees are separated by 72 years.

During intermission, one 40-something alumna confided to a friend, “I don’t know how I’m going to stay up for the Sherry Party,” the ritual end-of-year senior celebration that was scheduled anew especially for the alumni. But party they did, although there was reportedly far more catching-up than dancing.

In a weekend of memorable moments, perhaps none was more stirring than at the Emerson Suites banquet when Lee Byron announced that the IC theater program was so talent-rich “that we could cast some of our shows five times over” and then introduced “the students not in Chicago.”

Two long lines of young men and women filed in, beautifully singing “I Can’t Help Falling in Love with You.” Alumni and faculty rose in a standing ovation, and there was barely a dry eye in the house. 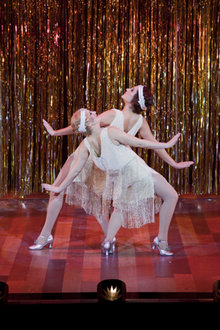