Benjamin Rifkin Steps Down as Provost

Benjamin Rifkin, who had served as provost and vice president for educational affairs since June 2015, stepped down from that post effective July 31. He remains on the faculty as a tenured professor in the Department of Modern Languages and Literature.

While serving as provost, Rifkin concentrated his efforts on integrating co-curricular learning into credit-bearing courses and enhancing communication and collaboration among various campus constituents.

Rifkin said he felt honored to serve as Ithaca College’s provost. “At the same time,” he said, “it has been a tumultuous year, for all of us on campus. During this time of transition, I have decided that it is best for me and for the college that I resume my role as a professor and contribute to the mission of the college through my work on the faculty.”

Linda Petrosino ’77, M.S. ’78, dean of the School of Health Sciences and Human Performance, is serving as interim provost. President Tom Rochon will not be initiating a search for a permanent provost, saying, “It is in the best interest of the college to allow the next president to select a new provost who is most compatible with his or her vision and leadership approach.” 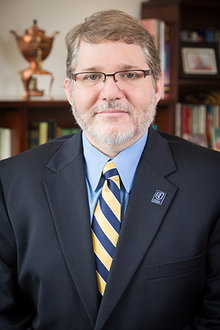