Robert Stegall-Smith 85: At Your Service

As far as Robert Stegall-Smith is concerned, the term “foodie” represents a welcome trend in American life.

“It works for me because people love food but hate to cook, which keeps me in business,” says Stegall-Smith, a corporate chef for Institution Food House (IFH), a food service distributor in the southeastern United States.

Stegall-Smith’s career in food service began when he worked in a bakery in New Rochelle, New York, for a year after high school. When he arrived at IC, he went to the Tower Club and asked the restaurant manager if they needed a baker.

“They said ‘No,’ but they did need a dishwasher,” he recalls.

Stegall-Smith, who majored in English and minored in business, washed dishes, waited tables, and tended bar at the Tower Club, rising to student manager. After graduation he worked as a chef for the school and university division of Marriott and went on to earn his degree from Culinary Institute of America. He then worked for an inn in Virginia and a hospital in South Carolina before joining IFH, where he has worked for 14 years.

Stegall-Smith also teaches at the Culinary Institute at the University of South Carolina. He was inspired to teach because of advice he received from Grant Payne, the Tower Club manager who supervised him as a student manager.

“He said, ‘Just remember, you always have to give back,’” says Stegall-Smith. “Besides, it’s fun teaching other people.”

Stegall-Smith embraces the enjoyable aspects of his career even as he confesses that working in food service requires one to be a “workaholic.”

“I love food, I love cooking, and I love serving people,” says Stegall-Smith. “I consider cooking art, but it’s instant art. You do it quick, get it right, and then you try something new.” 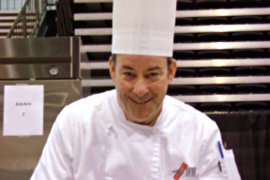