When asked why and how she came to embrace the idea that raw food is better than cooked food, Samantha Abrams answers quickly, “It is better for you!” Healthful enzymes, she points out, get killed at high temperatures. “It feels so good to feed your body life rather than death.”

But you can’t live on chai-spiced macaroons alone, so we asked Abrams to suggest a day’s menu for eating raw:

The above is a simple, even rookie menu, Abrams points out. “You can also make really sophisticated, complicated things like stuffed mushrooms, daikon radish ravioli, or raw pizza, using a dehydrator set very low.”

While Emmy’s Organics will stick to breakfast and delectable sweets for the foreseeable future, “we definitely want to continue to grow,” says Abrams about her company that now employs five people, “and to become known throughout the country and, later, globally, for making food people really enjoy. We want to be the face of health and goodness.” 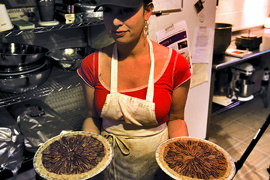