From lysine to littérature     By Sharon Tregaskis

Standing beside the podium in the Campus Center’s Taughannock Falls Room, Shanique Edwards has the poise and charisma of a seasoned professional as she describes her three-year collaboration with assistant professor of chemistry Keri Lee ’99. “We’re making a molecule that can be used as a scaffold for broken bones — to fill the space between the bones so you don’t have to have a pin or plate — which will degrade at the rate of bone growth,” she explains. Just a hint of her West Indian island roots infuse Edwards’s inflection as phrases like “hyper-branched polymer” and “toxic byproducts of degradation” roll off her tongue.

This is the second of two presentations the biochemistry and French major has made today as part of the James J. Whalen Academic Symposium. The first, a discussion of French Caribbean literature, sponsored by assistant professor of modern languages and literatures Elizabeth Berglund Hall, explored stories of youth and childhood.

A summer in Paris between her sophomore and junior years eased the effort by giving Edwards a chance to study grammar with a native speaker and gain a better sense of her own competence. “A big part of your presence in speaking the language is how willing you are to try to articulate what you want to say,” she says, noting that she was pleasantly surprised to discover her facility in the foreign tongue. “Students hesitate to speak up — in all classes — because they don’t want to sound stupid. Gaining that confidence was really good for me.” In 2008, that confidence was reinforced when Edwards was inducted into the national French honor society, Pi Delta Phi.

In the lab, Edwards has generated more research questions than one student can answer, says Lee, and taken a leadership role mentoring new members of the team. “Shanique really wants to do the research, understand what’s going on,” says Lee. “It’s contagious, and she’s great at getting new students in the lab excited about the work.”

Even after graduation, Edwards will continue to infuse the Ithaca College community with her energy and enthusiasm by mentoring incoming students. After a month off to reconnect with family at home in Barbados, the Garden Apartments resident assistant will return to campus as a peer leader for the Ithaca College Summer Institute, an academically intensive three-week program sponsored by the Office of Student Engagement and Multicultural Affairs and the Office of Academic Enrichment Services to ease the transition from high school for students of color.

In the fall, Edwards will head to New Jersey to begin Ph.D. studies in molecular biosciences in a joint program of Rutgers University and the University of Medicine and Dentistry of New Jersey-Robert Wood Johnson Medical School. Her research with Lee — which Edwards also presented at the American Chemical Society meeting in San Francisco, just two weeks before the Whalen Symposium — has focusedon the chemical synthesis of polymers for biomedical applications. At Rutgers, her research will take a more biological tack.

“I tell people that everyone should be a biochemistry major, and they look at me like I’m crazy,” she says. “I’ve always found science interesting and challenging — I’ve had to work hard, but that’s why I love it.”

Shanique, we are proud of you and your accomplishment, continue to actualize your desired goals. Impart your knowledge to young interested students. God grace and mercy rest with you always
aunty J 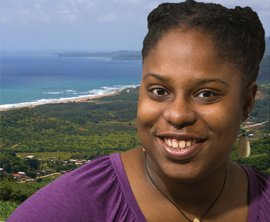 Majors: Biochemistry and French, School of Humanities and Sciences