“Ought a convicted adulteress and her paramour husband to be placed in the highest offices of this free and Christian land?”

This was the question planted in newspapers by supporters of John Quincy Adams in the 1828 presidential election, referring to Rachel Donelson Robards Jackson, the wife of rival candidate Andrew Jackson, and her husband. There had been some question about Rachel not having been officially divorced from her first husband at the time of her marriage to Jackson more than 35 years before, in the early 1790s. Yet the Jacksons had been indisputably legally married for more than three decades by the time of Andrew’s run for the White House.

Does such a smear campaign sound familiar? That’s not surprising. It should. Nearly two centuries later, John McCain’s campaign ads claimed that Barack Obama wants kindergarteners to learn about sex before they learn to read. There was nothing new about this tactic. McCain’s campaign was building on a long tradition: presidential candidates have been attacking and exposing their opponents for decades.

At least one observer thinks there’s nothing wrong with negative political advertising. John G. Geer, a professor of political science at Vanderbilt University, spoke at IC on “Why Negative Campaigns Are Good for Our Country.” “Democracy,” Geer posited, “requires negativity. If you want to protest and complain, you have to go negative.”

Geer discusses this theory in his book In Defense of Negativity. Attack ads, Geer says, no matter whether they are exaggerated or slanted, bring up important issues. “You can learn a lot about a candidate in 30 seconds,” Geer believes. “These packets of information are actually really informative.”

No matter how the information is packaged, it’s apparent that some things may never change. But, as Geer suggests, there’s a reason for that. 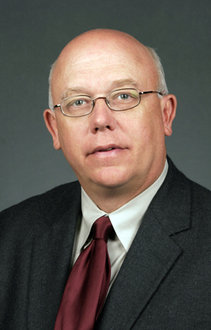 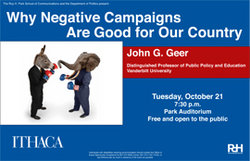