This fall the Ithaca College School of Music began live streaming its concerts. The Internet service was a big hit, with many parents writing in to say how much they enjoyed it.

Major General Arthur Bartell wasn’t able to attend his son’s concert during Family Weekend because he was deployed to Iraq, but he was able to watch the live web stream. He wrote to Greg Woodward, dean of the School of Music, to say thank you: “It is hard for me to articulate what it meant to be able to watch and hear Ben perform as a member of the chorus—live, in stereo.”

Denise Domotor wrote, “I am so emotionally moved by the chorus concert I just watched live streaming on the Internet. As a single parent, I’ll admit that it was not exactly easy sending my only child off to college. Ithaca College seemed the perfect fit for Kendra, though, and I felt confident that she would get a top-rate education there; one that would challenge her and help her raise her own expectations for herself. We are now barely into November, and I am already overwhelmed by the quality of education she is getting. The concert I just watched is only part of the proof that she is in the best place for her music education.”

Thanks so much for streaming these concerts, and for varying the camera angles. I could watch my beloved granddaughter! 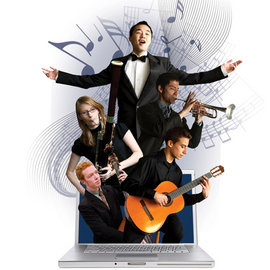