When Sean Walsh ’89 steps onto the Barnstable Silver Bullets’ football field, his players pay attention. Maybe it’s because he’s double their size and wears a red varsity jacket that could be wrapped twice around one of these 11-year-olds. But more likely it’s because he always remembers their names, numbers, and positions, gives them flashy helmet stickers for good play, and makes up funny words when he’s excited.

Sean’s protégés in basketball and baseball also show him this kind of respect. For all these growing athletes in Barnstable, Massachusetts, a small town on Cape Cod, Sean is coach, and he will no doubt influence their lives for years to come. He has coached 58 teams and more than 1,000 kids. That’s a lot of names to remember. “I don’t know how I remember every kid’s name,” Sean says. “I’m just good at it.”

When Pee Wee Football season ends, the Amateur Athletic Union Barnstable Mini-Red Raiders season begins for his 11- and 12-year-old basketball players; in spring and summer he coaches American Legion baseball for 15- through 19-year-olds. If that’s not a super-schedule, nothing is. “I rarely sleep more than three hours a night, and I have no social life,” says Sean. “But I love what I do.”

In 1987, as a junior English major at IC, Sean answered an ad in the Ithaca Journal for director of a nearby little league. He has been coaching ever since, with a two-year hiatus while he earned a master’s degree in English at New York University. At Ithaca, when he was not studying Shakespeare, Sean played intramural sports and ran 10 miles a day. Although he’d been an avid athlete in high school, a shoulder injury and a four-year stint in the Marine Corps Reserves, which tied up a weekend every month, kept him from playing Bombers baseball. Coaching filled his competitive sports void.

“Sean is always 100 percent focused on the kids’ learning,” says fellow Mini-Red Raiders coach Rob Stuart. “He has so much respect from his players that parents in town say, ‘We’ll call Coach Walsh if you don’t behave’ — and the kids listen.”

“He’s an awesome coach,” says 11-year-old Marcus Cunningham, who has played football and basketball for Sean for five years. “He says funny things like ‘How did Darth Vader get in here?’ and ‘Jiminy Christmas!’ ”

“I push kids to participate [in sports] in terms of constantly being active,” Sean says. “You don’t have to score 50 touchdowns, and I don’t care what the score is. What’s important is that kids are involved and not getting into trouble. There is so much bad out there in the world.”

“Coach Walsh teaches us to be the best we can be,” Marcus says. “He’s always helping everyone make sure you try your best.”

Sean tells a story about one of the best baseball players he ever coached. The youth started using drugs and eventually quit sports. A few years later, however, Sean received a letter from this former athlete, now serving in Afghanistan, thanking him for being one of the best and most positive influences of his life.

In basketball recruiting, Sean looks for underprivileged kids because he feels sports can positively direct them. “I want my athletes to leave sports as better persons,” Sean says. “I want them to never quit. I want them to eliminate self-doubt.”

Sean has watched his players eliminate self-doubts, go to college, get married, and have kids. He’s watched some become coaches, like him. But that’s not why he does it. “I told my athletes that it doesn’t matter if they become a violin player, soccer player, lawyer, or milkman,” says Sean. “What matters is that sports can help you become the best adult you can be by working hard, because working hard pays off.”

Sean Walsh should know — he’s the hardest-working superhero around. 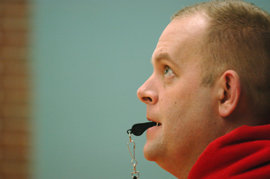 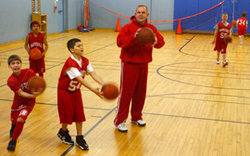 Sean Walsh appreciates having a positive effect on children's lives.

Photos by Steve Heaslip / Courtesy of the Cape Cod Times