When a worker at Wendy’s was fired from her job in 2012 for taking a stand against unfair wages, Harold Miller ’03 decided to stand with her. In fact, as a field director for New York Communities for Change (NYCC), he organized other workers and supporters to take a stand, too.

“We actually shut down business in that store for about two and a half hours,” he said. “The store could not operate because we blockaded doors and flooded the lines. One Wendy’s employee told us that the company lost over $5,000 that day.”

The demonstration led to the woman getting her job back.

Now, years after graduating from IC, Miller is leading in another capacity, under the mentorship of New York City’s mayor, Bill de Blasio. Miller is the deputy commissioner for civic engagement in the mayor’s Office of Community Affairs for the City of New York.

Miller began his leadership track as a first-year student with the African-Latino Society (ALS) at IC, which aims to promote the cultural, social, economic, and political welfare of students of color. From his position in internal affairs for the club, Miller rose through the ranks of the general body and executive board and became president of ALS his senior year.

“My first love was ALS,” he said. “The work that I did within that organization helped me in so many ways. Number one, I learned about people.”

Miller’s job as commissioner is to ensure that the office is aware of issues in the community. Most of his days are spent interacting with the community, either on the phone or in person, to get a sense of what’s going on.

“I spend a lot of my day getting feedback, keeping my ears to the ground on what is happening within neighborhoods in New York City, so the administration can have a pulse about what’s going on,” Miller said. “That’s a key component to the community affairs unit. If there are issues that are rumbling in the community, then we need to know about it.”

Before working in the mayor’s office, Miller worked in the nonprofit sector with the Association of Community Organizations for Reform Now (ACORN) and later with NYCC, where he led the wage strike for fast-food workers. With ACORN, he assisted low-income families by organizing efforts to improve access to affordable housing, education, and a living wage.

Miller majored in history and said Professor Zenon Wasyliw was one of several mentors.

“[Because of Professor Wsyliw], I look at history not just as facts and dates but context,” he said. “What mattered is how events shaped the world we live in, and I learned a lot from that.”

Miller says his academic experiences and involvements at IC launched him into his career in organizing and helped perfect his craft. The skills he learned through ALS had real-life applications for working with people. Whether it was conflict resolution or moving people to care about certain issues, Miller said ALS exposed him to the inner workings of organizing.

“I learned about how to deal with conflict in a real way,” he said. “ALS helped me to figure out ways to talk to people and organize them to move on issues, whether it be education or housing, police, whatever.”

Miller said the challenging moments he experienced in ALS still aid him when difficult situations come up.

“It was a taste of what was to come,” he said. “When crises hit, I know I’ve been through something similar before, so I’m not as nervous or scared or hesitant. I just do what I have to do.” 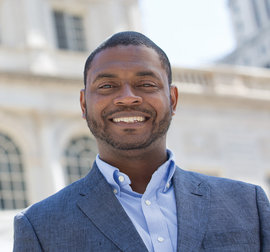