“We each bring a history to any moment,” says IC politics professor and noted feminist Zillah Eisenstein. “bell hooks brings many moments to this moment.”

Not a single seat was left open in 102 Textor Hall on October 5, as students, faculty, and community members shared a moment with author and social critic bell hooks. Many were forced to find a seat on the floor, and some stood in the hallway as they listened to her words on feminist theory and racism in the United States.

Asma Barlas, professor of politics and director of the Center for the Study of Culture, Race, and Ethnicity (CSCRE), which sponsored hooks’s visit to campus, says she was grateful to speak on behalf of hooks, since they share an identity as women of color living in the United States.

“I have felt deeply moved by hooks’s work,” says Barlas. “She did such a wonderful job when she visited the College in 2001 that we asked her to come back. I had the honor to welcome her then, and I did so from the very margins I occupy myself as a new immigrant to this country.”

hooks’s talk was part of CSCRE’s 10th anniversary discussion series, Centering the Margins, which is examining how marginal or excluded peoples exist within a system of social, racial, and sexual boundaries. The series explores not only the limitations marginal populations face but also the possibilities they have to drive change.

Throughout her presentation, “Talking Race: Ending Racism,” hooks talked about how women are often excluded from the discussion of race, even though they play a pivotal part in teaching generations about racism and sexism in our country.

“When the issue of race is talked about, it has always been seen as a dialogue between men,” she says. “To understand how this drama plays itself out today, it is essential that we look at the role of women.”

Born Gloria Jean Watkins in Hopkinsville, Kentucky, in 1952, hooks changed her name and lowercased it to emphasize the content of her writing as opposed to her identity as an author. Since then, she has published 30 books, including Ain’t I a Woman?: Black Women and Feminism. The book, which was written in 1981 but wasn’t published until 1992, was lauded as one of the 20 most influential women’s books in the last 20 years by Publisher’s Weekly.

hooks’s discussion also covered the role popular culture plays in identifying women. She talked about how movies and books can undermine the image of strong, independent women.

“Books like The Help portray black domestic help as really liking the white women they worked for,” hooks says. “This media portrayal is generally wrong. A lot of black women shared disgust over the laziness of white female employers.”

When asked by an Ithaca College student about what to do about sexism and racism, hooks offered one bit of advice.

“Everybody is involved in the system in some way as part of the machinery,” hooks said. “But there are no closed systems, and the task of the resistance struggle is to find an opening.” 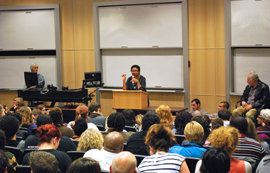 bell hooks speaks to a full house in Textor Hall in October 2010.