As far as she’s concerned, Tara Pastuszek has the perfect career.

“I have no problem getting up for the day knowing I have to cook,” says Pastuszek, a marine chef on the research vessel Point Sur for Moss Landing Marine Laboratories in California. “It’s something I absolutely love. It allows me to be creative, and I think sustenance is the key to everybody’s life.”

Pastuszek, who majored in communications, had her sights set on a career in broadcast media when she entered IC.

“After college, I realized I wanted to work and travel and not be tied down to an office, so I pursued a whole different life than television and radio,” she says. “I loved what I learned in school; I just ended up applying it differently.”

For most of the decade after she graduated Pastuszek worked in a variety of roles for Kinko’s Inc. She realized she was tired of the business world so she left Kinko’s on a self-imposed sabbatical. She cooked a lot and spent time traveling through the South while contemplating her next career move. Eventually, she decided to pursue her longtime dream of being a chef and spent over five years working in a variety of restaurants on the eastern shore of Delaware. Two years ago, she answered an ad for a relief cook aboard a vessel owned by the University of Delaware. That opportunity led to a full-time position on the vessel in California, owned by the National Science Foundation.

“Life should be well-spiced and peppered with passion,” she writes on her website, The Well Spiced Life. “I am always thinking about what to create next. What flavor combination is next, what I can taste, feel, chop, smell, mince, roast, saute, marinate, bake, steam, slice, reduce, sear, and grill next for someone to experience. It sure beats the way I used to live.” 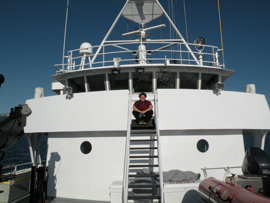