A dozen years, 10 Broadway shows — that’s quite a run.

Graduating with a B.F.A. in musical theater, Mark Price ’96 landed his first gig as a dancing dog in the first national tour of Disney’s 101 Dalmatians. Next followed a role in Paul Simon’s groundbreaking but troubled The Capeman, directed by Mark Morris, about which Price says, “[It had] some of the most talented people I ever worked with, but it shot down any expectations I had about Broadway shows. After that, I could let go of hopes of a show being a success. It was a gentle reminder that in the end, it’s just about the work.”

And for Price, that work has been steady: From the ensembles of Chicago and Wonderful Town to a string of distinctive character roles (with a sidestep as DJ Freaky on NBC’s Law and Order), he has enjoyed a varied career in New York musicals. His first early role as a Broadway understudy, in You’re a Good Man, Charlie Brown, ended up with him onstage solo, as Snoopy, replacing an actor who’d been known for never missing a performance. “It was me, a dog dish, and a spotlight for about four minutes,” Price recalls. “Which is ultimately terrifying. But I did pretty well.” (He admits he identified with Snoopy’s “devilish sensibilities.”)

Price went on to play the flirtatious Pepper in Mamma Mia! and the transsexual Riff Raff in The Rocky Horror Show (for which he was also dance captain). Among his wealth of experiences, he cites All Shook Up and the Sondheim Festival at Lincoln Center as his two favorites. In both he had the luxury, he says, of “working with directors [Christopher Ashley, Eric Schaeffer] who completely trust you — you can create things that are entirely unexpected.”

For his role as the homeless Tobias in the Kennedy Center’s 2002 production of Sweeney Todd, Price earned a Helen Hayes Award nomination. Modest about his multiple talents, he attributes his success partly to luck and to his “outstanding” IC training. “At IC,” he says, “we learned new and different techniques that hadn’t found their way into college environments yet. By the time I graduated I had a huge diverse platter to choose from.” Price praises the rich grounding in musical theater history he gained from his mentor, associate professor Mary Corsaro. “She has the perfect combination of heart and discipline,” he says. “She passed down traditions and knowledge you can’t learn in books.”

For the past two years Price, now a boyish 35, has been shining in the farcical role of Robertson Aye, the much-put-upon houseboy in Mary Poppins. Amidst all the show’s visual spectacle, he has shaped an intimate character from the part of a fellow he describes as “a lump on a log.” Price delights in his close teamwork with Jane Carr, the cook, his main scenic partner. “Selfless ensemble acting,” he says, “is part of the reason I got into this business.”

While he may stay in the show a couple more years, he dreams of a theatrical life outside New York. “I definitely see a backyard in my future. Fresh air, green grass — that’s not too much to ask for.” 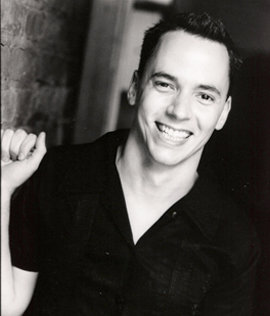 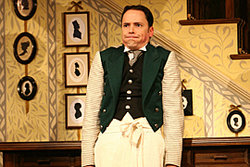 Courtesy of Disney on Broadway