The film adaption of Ten Thousand Saints, a novel by IC associate professor of writing Eleanor Henderson, will open in select cities on Friday, August 14, with a wider release the following week.

ICView talked with Henderson about what it was like to watch the characters she spent 10 years creating come to life on the big screen.

The book was adapted into a film by director and screenwriter duo Shari Springer Berman and Robert Pulcini starring Ethan Hawke, Hailee Steinfeld, and Asa Butterfield.


“The emphasis in the movie is more on the family than on the [punk] band, and I think that was a good choice,” Henderson explains. “They changed the plot a fair amount, left out a fair amount, but what’s left is really faithful.”

Henderson was also impressed with the directors’ casting choices for her characters. Teenaged actors Butterfield, Steinfeld, and Avan Jogia play the roles of Jude, Eliza, and Teddy, respectively.

Ethan Hawke plays the part of Jude’s father, Les, a casting selection Henderson, Berman, and Pulcini fantasized about as “a long shot,” years before the film adaptation was a reality. And Emile Hirsch, who looks different from how Henderson imagined the character Johnny, won over the writer with his performance.

Ultimately, Henderson says Berman and Pulcini’s high degree of creative liberty was ideal. “I can’t imagine a more rewarding feeling, as a writer, than to see that your work stayed with somebody so powerfully that they wanted to tell it again in a different medium,” Henderson says. “I’m so incredibly grateful.”

Ten Thousand Saints premiered at the Sundance Film Festival last December. It will be released on August 14 in 25 select theaters throughout the country, including Ithaca’s own Cinemapolis. 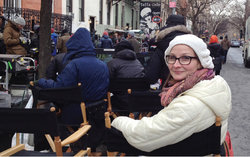 Eleanor Henderson on the movie set. Photo by Sam Henderson