The Enduring Impact of a Teacher

There is no email quite as wonderful to open as a message from a former student. That is because the teacher-student relationship is so special. As a teacher you have the opportunity to work with students who are full of potential, and it is your job to help them unlock that potential. It is a remarkably rewarding relationship, one whose primary drawback is that the relationship generally ends when the student graduates.

Retirements from the Ithaca College faculty this past May gave me several opportunities to see evidence of the special relationship that develops between professors and their students. I attended several retirement receptions held for IC faculty this spring and noticed that the remarks offered by deans, faculty colleagues, and current and former students went to the heart of what it means to be a college professor. At the reception for Professor Wenmouth Williams of the Roy H. Park School of Communications, his colleague Professor Patty Zimmermann described his teaching in terms any faculty member would be proud of:

He anoints his students [as] the future explorers of the vast continents and deep oceans of global communications. He worries about their writing, their reading, their critical sensibilities, their intellectual engagement. He pushes them. He tells them repeatedly, insistently, passionately: “You can do better than that.” He believes in their ideas.

The most authoritative sources of praise for a retiring faculty member are alumni who bring the benefit of perspective as they look back on how their former professor helped shape who they are today. There were a few former students at each of the retirement receptions I attended, including more than 40 alumni at a reception held in New York City for Raquib Zaman, Dana Professor of Finance in the School of Business. Zaman’s former students came from five different decades—the 1970s to 2013—and from as far away as Texas, California, and London, to honor their former professor.

Talking with them at the reception, I learned that some of them could no longer recall specifics of what they learned in his classes. What Professor Zaman’s former students did remember was his infectious passion for his subject, the breadth of his expertise, the high standards he set, and the way he made students want to meet those standards. They remembered that he made them curious to learn more about a topic some of them had initially approached with trepidation.

Lee Bird ’86 spoke for many when he said, “Managers build a fire underneath people; leaders build a fire within people. Professor Zaman, you built a fire in me, and 30 years later that fire has not gone out.”

Having been a professor for two decades, I can tell you that kind of impact is what we live for: to share something of ourselves that is of value to our students as they go through life. That “something” might be a set of professional skills, but it is more likely to be the development of values, the sharpening of curiosity, and the ability to become a lifelong learner.

Do you ever think about some of your former professors at IC? It might surprise you to know that they think about you, too: they wonder what you are doing and what you retain from the time you spent with them. Why not write to a professor you remember as having been important to you? He or she will agree with me that there is no email quite so wonderful to open as an email from you. 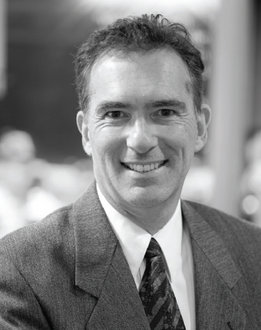 "The most authoritative sources of praise for a retiring faculty member are alumni who bring the benefit of perspective as they look back on how their former professor helped shape who they are today."