It all started with a business card.

Thomas Padula ’15 first met Mark French ’97 when French gave a talk about his business, Mission Athletecare, to a class of Ithaca College students. Mission Athletecare creates performance-elevating products for athletes, and French—a founding partner—has perfected his products with the help of professional athletes like Serena Williams, Reggie Bush, Dwyane Wade, Carmelo Anthony, Drew Brees, Mia Hamm, and others. Padula, a business administration major, was inspired by French’s ability to take his strengths and love of sports and blend them into successful businesses.

“I was studying business, but I wasn’t sure what I wanted to do with it, and I knew I loved sports,” says Padula, who played football for the Bombers after transferring to IC in 2012. “So if I could combine sports and business together, it seemed like a bull’s-eye.”

After the talk, Padula lined up with dozens of other students who wanted to meet French. French was impressed by Padula’s questions during the talk and gave him his business card. Padula set an alarm on his phone that reminded him every two days to email French. After about a month and a half, he got French on the phone.

“He gave me a chance,” says Padula. “And that’s all I was asking for. That’s a big part of what I was saying in my emails and my calls: I just want a chance.”

While not everyone enjoys being emailed every two days, French saw something of himself in Padula: hustle.

“I knew from the minute I met Thomas that he was special,” French says. “I have given so many talks at universities across the country, and I can’t tell you how many young men and women who love sports and entertainment approach me and say they want an internship or a job. I always explain that it isn’t all glamour and taking pictures with athletes, and there are as many low times as there are highs and countless hours of hard, hard work.”

After those discussions, French said, his business cards often end up in the trash can.

“I tell everyone, if you call me, and you really do your work and are prepared, I will help,” says French. Not only did Padula call French repeatedly, he did the work. "He was always well researched, always had a plan, and most importantly to me, he was authentic," French says. "It wasn’t a question of if I would help him. It was how I would help.”

French’s own story is one of innovation and determination. The television-radio major joined NBC in his mid-twenties and then worked his way up within the company to eventually become the founder, senior vice president, and general manager of the business he created, NBC Everywhere. The business delivers NBC content and ad messaging across digital platforms including on screens in taxis, trains, mobile phones, and airplanes, and at gas pumps and checkout lines in Walmart and supermarkets. NBC Everywhere delivers over three billion impressions a year, meaning its content and ads are viewed by millions of people. French is still the youngest person in NBC history to run a business division.

The success French garnered with NBC Everywhere gave him the courage to pursue his idea for Court Grip, a patented formula that professional and amateur basketball players apply to their sneaker soles for better grip on the court. French played basketball as a kid and was a ball boy for the New York Knicks. He noticed that players were always wiping the bottom of their soles to try to get rid of the dust and gain traction. His idea for Court Grip was born.


Padula Gets His Break

Five years after the launch of Court Grip, French was in the midst of testing another innovative idea, and this time he included Padula in his plan. French asked Padula to intern with Mission Athletecare that spring, working with a new product called Cleat Grip that French was developing with National Football League superstar Reggie Bush and two-time Olympic gold medalist soccer icon Mia Hamm. Cleat Grip keeps mud from accumulating on the bottom of cleats during competition, allowing athletes to make cuts more easily. Padula field-tested the product at IC, bringing it back to campus to see how his football teammates liked it.

“We played on grass at Ithaca,” says Padula, a former running back. “So I ended up being a perfect candidate to test out the product, ask my friends what they thought of it, gather feedback from focus groups, and then report those findings to Mark and his team.”

French was so impressed with Padula’s work on Cleat Grip that he offered him an internship in New York City that summer. But Padula didn’t have enough time to find suitable housing in New York City, so he had to call and turn down French’s offer.

“I was pretty emotional about it, says Padula. “And then he said, ‘Hold on a second.’”

It was worth staying on hold: “When French came back on the line he said, ‘You have come too far for us to get tripped up on a technicality. My wife gave us the go. You’re going to move in with us.’”

So the summer before his senior year, Padula interned with French, helping with a handful of his companies, including IS, a live location-sharing mobile tech startup; Mission Athletecare; and the Players’ Tribune, French’s latest media/sports venture founded by Derek Jeter.

Living in Westchester, New York, with French and his family gave Padula new insight into the entrepreneurial spirit that starting and running your own companies requires.

“I got to see every single day what it truly takes,” says Padula. “Getting up at 4 in the morning, going to bed at 11 o’clock—constantly reaching out and building your network.”

French also guided Padula when it came time for his job search, pushing him to create a postgraduation plan. Padula met with staff from IC’s Offices of Career Services and Alumni Relations and shared his plan for what he wanted to do after college. When Andrew Steedman ’13, an inside sales representative at Madison Square Garden (MSG), contacted IC’s career services staff looking for potential applicants for jobs at MSG, the career services staff immediately recommended Padula.

“No matter what stage you’re at, you can do anything you want with the resources the college provides,” Padula says.

After graduating, Padula was hired as an inside sales representative at MSG, where French started his career as a 14-year-old ball boy. Padula works interacting mostly with season ticket holders who purchase suites for Knicks, Rangers, and Liberty games and concerts. He has since brought in a lot of new business for MSG, working with clients including chief executive officers of hedge funds and Fortune 500 companies.

What Padula’s most proud of, though, is his work with nonprofits that help children with autism, multiple sclerosis, and Down syndrome. He said he’s helped plan fundraising events at MSG that have made the nonprofits lots of money and made lots of memories for the kids, too.

“Even though it’s not the most profitable piece of my job, it is the most rewarding,” he says. “It changed my life meeting those kids. It is one of the core values Mark and I share, and he always stresses to me the importance of ensuring that philanthropy is part of everything I do.”

In less than a year at MSG, Padula was promoted to account executive, which, according to French, is unprecedented. He and French remain close. They have a formal meeting once a month to discuss Padula’s career, and they still play either basketball or football together once a week. French also brings Padula to key sports networking events. Padula has also remained close with French's Family, including his wife, Meghan, and two children, Brayden, 6, and Campbell, 7.

“What he’s been to me is a true mentor,” says Padula. “He’s someone who’s going to be honest with me and critique me. He is also someone I know will do anything to help people who have a good heart and have shown they will do whatever it takes to help themselves.”

Padula is grateful to French for helping him bridge the gap between college and a professional job.

“That was the biggest thing that he did for me,” says Padula. “He lit a flame underneath me and let me know that it’s all possible.”

French was proud when Padula landed a job at MSG right out of college.

“It was proof that off-the-field coaching from someone who shares similar interests, morals, and work ethic can be extremely powerful,” French says. “After hugging Thomas and telling him how proud I was, I told him, ‘The only payback you owe me is to ensure you help the next generation. Make sure you are a resource to share this playbook with the next generation of Bombers.’” 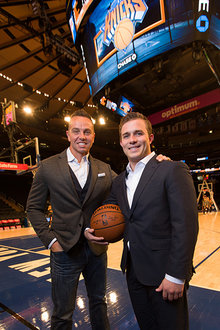 This fall Ithaca College launched a new service: IC Mentor Connect. IC Mentor Connect matches up students and alumni, so they can develop personal mentoring relationships. Both students and alumni share their interests and experiences through an online portal, and those seeking mentors receive recommendations for potential matches. The students then reach out to potential mentors.

Interested in being a mentor? Join IC Mentor Connect. Visit alumni.ithaca.edu/mentoring to find out more.

Mark French ’97 is an active member of the IC Athletics Advisory Council.

Thomas Padula ’15 is active with the National Football Foundation, and Marc Hudak ’90 serves as the chairman of the organization’s New York City chapter.