The historical photos in this story are from the C. Hadley Smith Photograph Collection, in the Ithaca College archives. 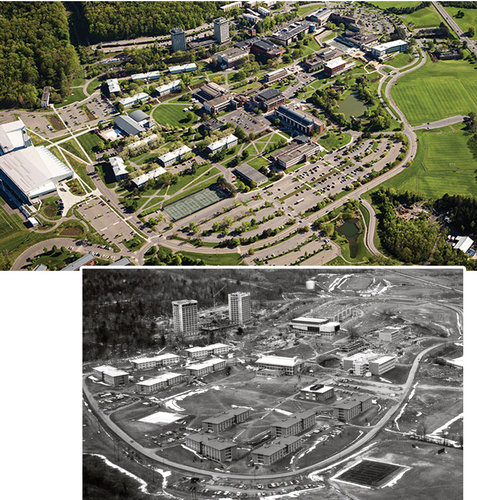 The contemporary aerial photo above is by Jon Reis. 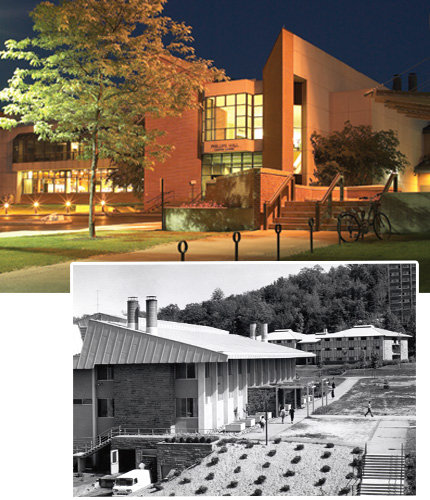 Phillips Hall was built in 1987, joining with Egbert Hall to create the Campus Center complex. In the present-day photo at top, you can almost make out the roof and two chimneys of the original College Union building on the far right. The contemporary photo is by Tom Watson. 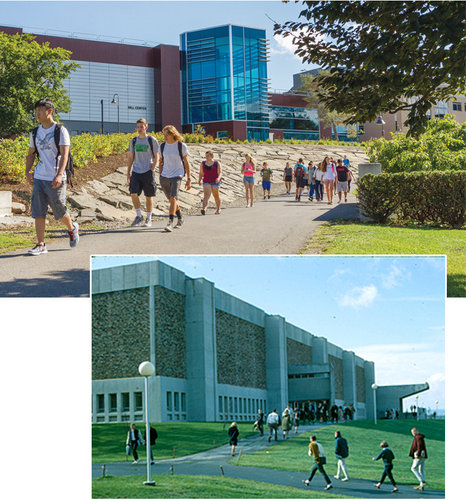 The Laurence S. Hill Center, also known as the Hill Physical Education Center, was named after the dean of physical education from 1919 to 1957. Renovations to the building were completed in 2014. In addition to getting a new façade, the indoor pool was turned into a two-story facility, containing multipurpose rooms and athletic training facilities. The contemporary photo is by Giovanni Santacroce. 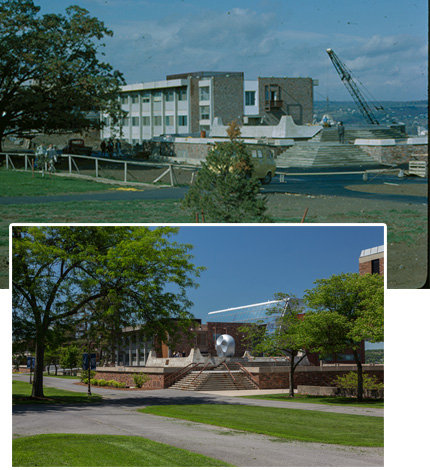 In October 1965, the roof of Textor Hall was still under construction and landscaping was in progress. The Disk, commonly referred to as the Textor Ball, was placed atop the roof two years later. In 2008, the doors of the Dorothy D. and Roy H. Park Center for Business and Sustainable Enterprise opened. You can see it peeking out from behind Friends Hall. The contemporary photo is by Adam Baker. 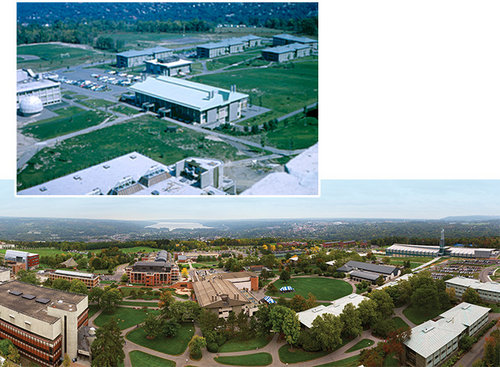 The photo from 1965 (top) shows the lower quad, with the roof of the library in the foreground, the College Union in the middle, and the J. David Hammond Center for Student Health Services just above it. On the left-hand side you can see the Science Building, complete with a dome-shaped greenhouse. Today’s panorama shows an expanded campus, from the School of Business building on the far left to the Athletics and Events Center, which opened in 2011, on the far right. In front of that is the Fitness Center, which was built in 1999. Beyond Williams Hall you can see the Center for Natural Sciences, which was built in 1992. At just about 12 o’clock you can see the Roy H. Park School of Communications, built in 1989. The contemporary photo is by Adam Baker. 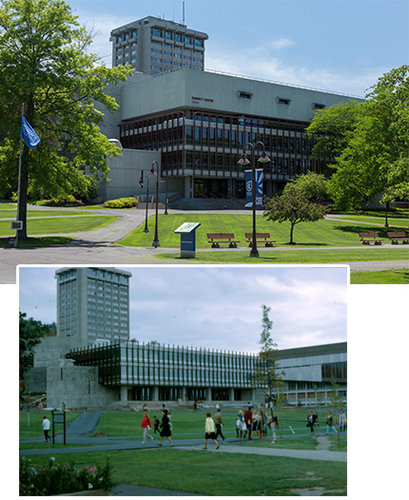 In fall 1965, the library was still being built. The lower photo shows the exterior walls being completed. In 1976, the library was incorporated into the Caroline Werner Gannett Center and a two-story addition was built on top. The contemporary photo is by Adam Baker. 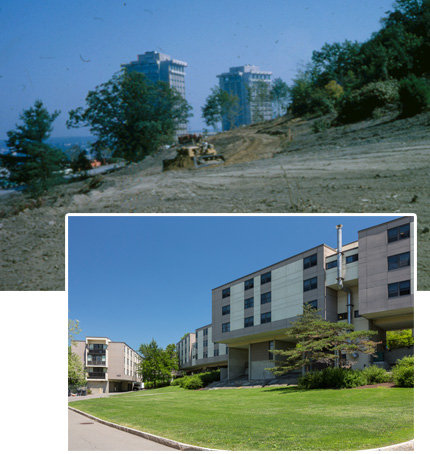 Students began living in the terraces residence halls in 1966. Many residents swore that they could feel the buildings swaying as the winds blew up from the lake. Here you can see them just beginning construction. The contemporary photo is by Adam Baker.

Students took shuttle buses from dormitories and academic buildings located in downtown Ithaca to the South Hill campus until 1970, when most of the initial construction was completed.

Great to be reminded by the old photo memories.
It wasn't 1970, it was 1968 that South Hill became self-sufficient, as I remember it. Academic year 1967-68, my freshman year, was the last for commuting to the final downtown academic building, R-TV & Drama. The only other IC building still operating was the ancient dorm at the old hospital.
By Fall 1968 all classes were on South Hill.

My husband, Bob Torns (music), was in the first class to graduate from the 'new' campus which 'looked down upon Cornell' as I remember the phrase being used. He also lived at Quarry Dorm. I wish he was still here to see those old photos, but as I was there too, I remember them well.

Students use the IC shuttle bus to get to campus in this 1965 photo from the Ithaca College archive.