An audition near the end of his freshman year “changed everything” for Thomas Lehman.

Before the audition for Mozart’s comic opera La Finta Giardiniera, Lehman was a music education major. When it was over he decided to major in music performance.

“I realized it was something I could do, and I had the capabilities vocally to do it,” recalls Lehman, who landed the role of Roberto/Nardo, a servant disguised as a gardener, performed as a baritone. “The experience of working with the cast, working with the great conductors here, definitely changed my four years at IC.”

Lehman’s parents encouraged him to attend Ithaca College because they wanted him to get a liberal arts education “but not sit in one building all day.” The financial package offered helped cement Lehman’s decision.

His parents needn’t have worried because Lehman definitely hasn’t sat still. Since La Finta Giardiniera, he has performed in operas, not only at Ithaca College but also Cornell University and the Pennsylvania Lyric Opera. He has also been a member of the Ithaca College Choir and the choir at the First Presbyterian Church in Ithaca, garnered performance awards in regional competitions held by the National Association of Teachers of Singing, and made the dean’s list every semester.

Outside the classroom, stage, and rehearsal hall, Lehman says Ithaca’s cultural offerings, especially its live music scene, expanded his appreciation for genres other than opera and classical music. “I’ve gotten into alternative music and other music that I didn’t necessarily know existed when I was back at home,” says Lehman. “And I appreciate more of the visual arts now.” He also admits that IC has introduced him to a diversity of viewpoints and that his evolving opinions have sparked some passionate discussions with his father.

After graduation, Lehman will attend the Eastman School of Music to study for a master’s degree in vocal performance. Ten years from now, he hopes to be in a young artist’s residency with a “good-level” opera company such as the Houston Grand Opera or Florida Grand Opera.

Looking back, Lehman points to two other performing experiences that had an impact on him as significant as the audition for La Finta Giardiniera. During the most recent spring break, Lehman and the rest of the Ithaca College Choir toured the southeastern United States, performing at churches and other venues in Georgia, South Carolina, North Carolina, and Washington, D.C.

“It was a life-changing experience,” he says. “We spent a lot of time in a circle, discussing the music and getting to know each other. It was a very spiritual experience just being one choir and, it may sound corny, being one voice and understanding everybody musically and emotionally.”

The third experience Lehman believes will guide him for a long time was performing the lead role in Rachel Portman’s opera based on the children’s novel The Little Prince.

“There’s a moral lesson in that story,” says Lehman. “It’s that you can learn something from every person you meet. 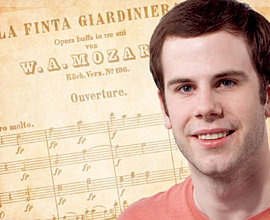 Major: Music performance, with a concentration in voice, School of Music