For more than 30 years, IC has sent graduating seniors into their post-college lives with a bang by treating them and their families to a fireworks show on the night before graduation, following the Commencement Eve Concert. The show requires six months of planning and collaboration between student groups and local organizations. The fireworks, which go off rain or shine, are launched from the fields behind the Athletics and Events Center.

What better way to celebrate four years of hard work than to jump into a giant fountain with hundreds of your closest friends? Although the tradition of jumping in the college’s iconic Dillingham Fountains began in the late 1980s and was open to all students, safety concerns caused former president Peggy R. Williams to move the tradition to Senior Week, and thus, Senior Splash was born. Each year, students gather for a wet and wild time in the fountains, where beach balls and inflatable rafts are a common sight. 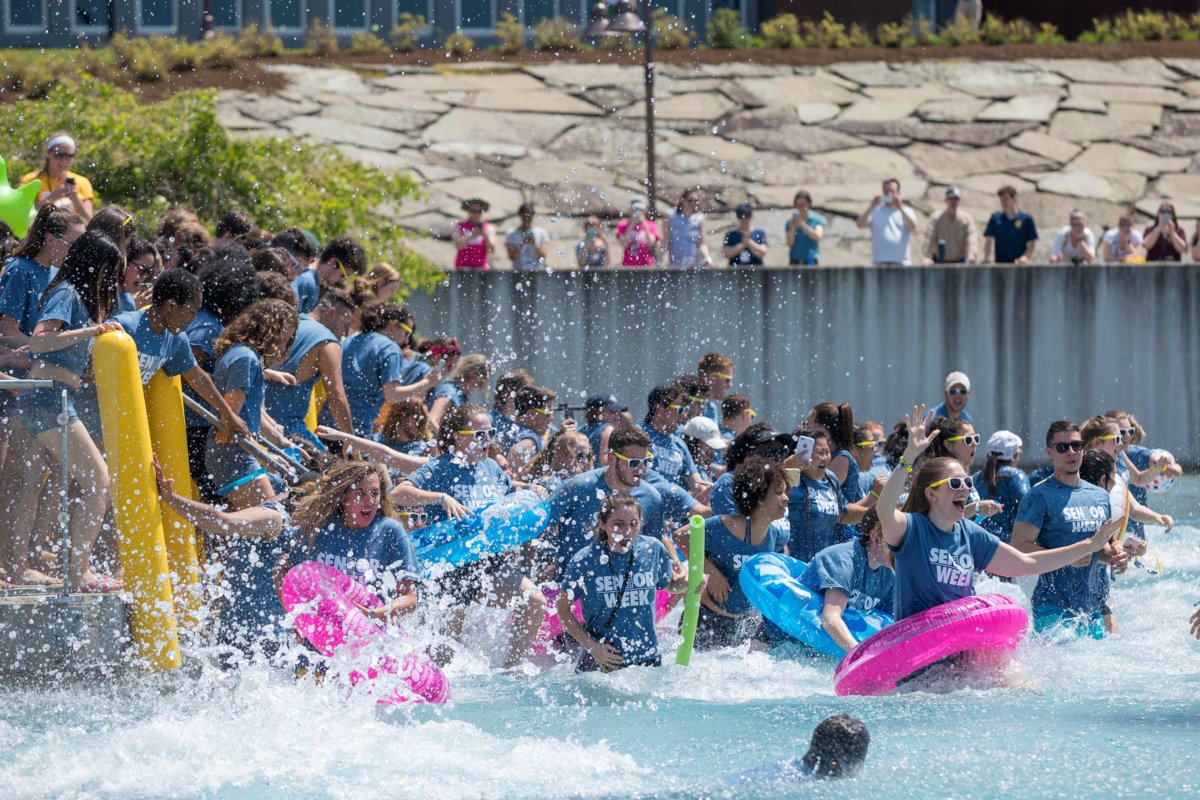 Handing Out Medallions to Seniors at Graduation

This tradition began during the college’s centennial year, when former president James J. Whalen personally handed out the medallions, which were inscribed with the message: “Congratulations and best wishes to the 1992 Centennial Class.” Now, the medallions are handed out by IC alumni, and the inscriptions are often quotes from famous individuals such as Albert Einstein. In 2010, the school honored President Emerita Peggy R. Williams by using her quote: “How do I want to live my life? Who do I want to become?”

A medallion given to a senior at graduation

As a book-end to commencement, the college created First Bomber Weekend to start first-year students’ college careers off right. Four years ago the offices of Residential Life, Recreational Sports, and Alumni Relations came together to create First Bomber Weekend, a series of campus and community events for first-year students to take part in with their fellow classmates. Today, the weekend is also put on with the help of the Office of Public Safety and the campus group Students Today Alumni Tomorrow. This year’s weekend included Fountain Fest, when new students poured a cup of water into the college’s iconic Dillingham fountains, followed by fireworks. Another popular event pitted students against Public Safety officers in cutthroat battles of Mario Kart. 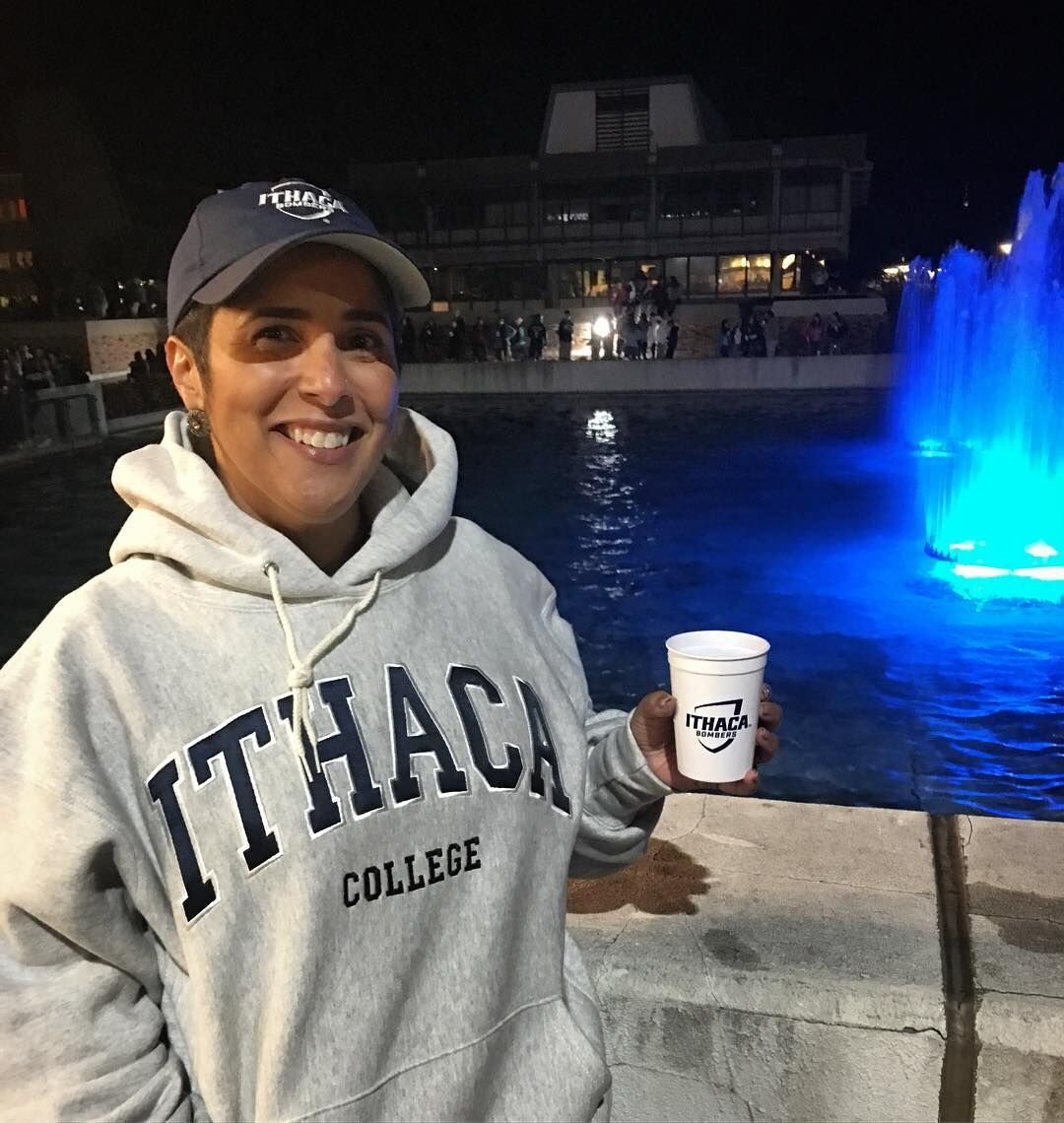 Purple and White Balloons at Graduation

At commencement, the graduating seniors of the Department of Theatre Arts stand out in the crowd because of two balloons tied to their wrists: one purple and one white. The white balloon memorializes the life of Peter Bergstrom '81, who died in a car accident during Senior Week just a few days before graduation in 1980. The purple balloons commemorate Richard Clark, chair of the theatre department from 1981 to 1987, who was killed in a plane crash just three days before graduation in 1987.

Ithaca has a strong LGBTQ+ community, and support for the community can be seen in the tradition of flying the rainbow flag in honor of National Coming Out Day. The flag has been flown since before 2001 and sends a powerful message of love and acceptance to members of the LGBTQ+ community on campus, as well as alumni. Luca Maurer, program director of the college’s Center for Lesbian, Gay, Bisexual & Transgender Education, Outreach and Services, called the flag a symbol of hope, community, inclusion, and diversity. 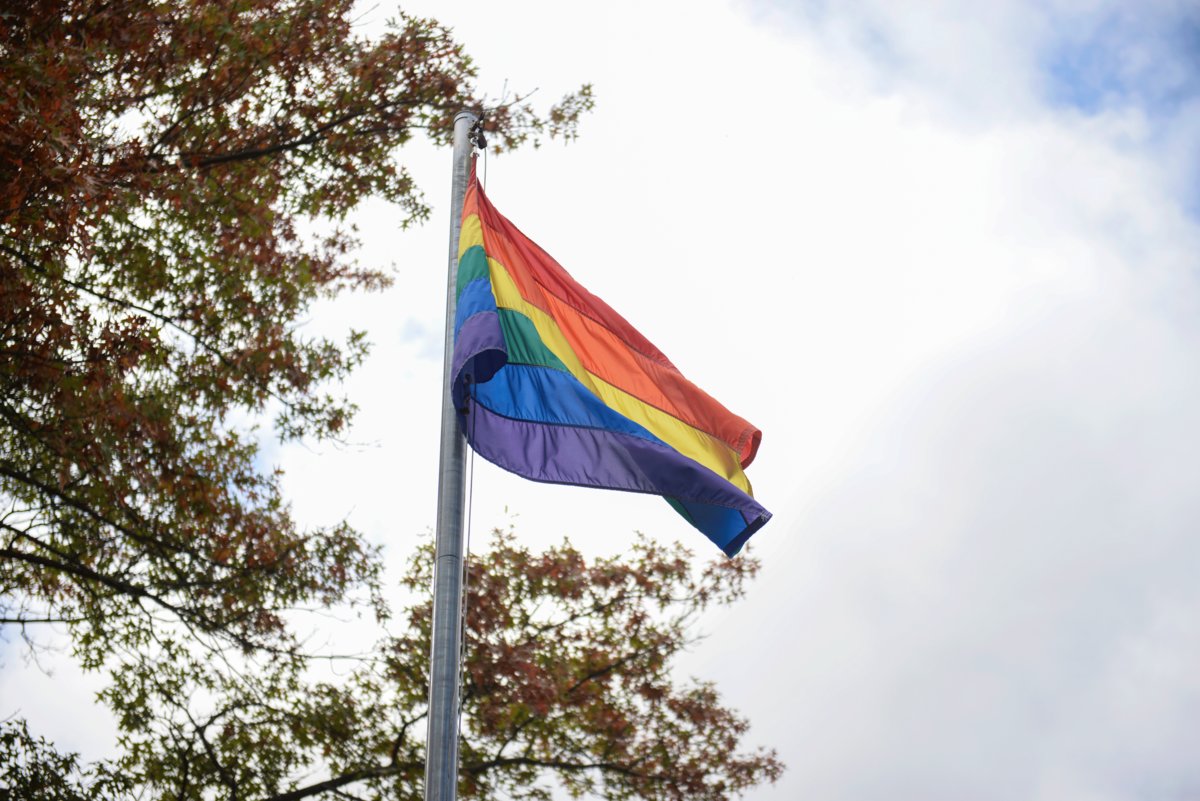 For most college students, sleep is treasured. But for one weekend, a pair of DJs at 106 VIC, one of the college’s two radio stations, do everything they can to avoid nodding off, all in the name of charity. The result is the station’s 50-hour marathon, in which two DJs stay on air from 4 p.m. on Friday to 6 p.m. on Sunday in order to raise money for a local charity. The tradition began in 1986, when Janet Snyder ’87 came up with the idea as a way to promote the station. But perhaps more importantly, over the ensuing decades, the marathon men and women of VIC have raised thousands of dollars for local charities. 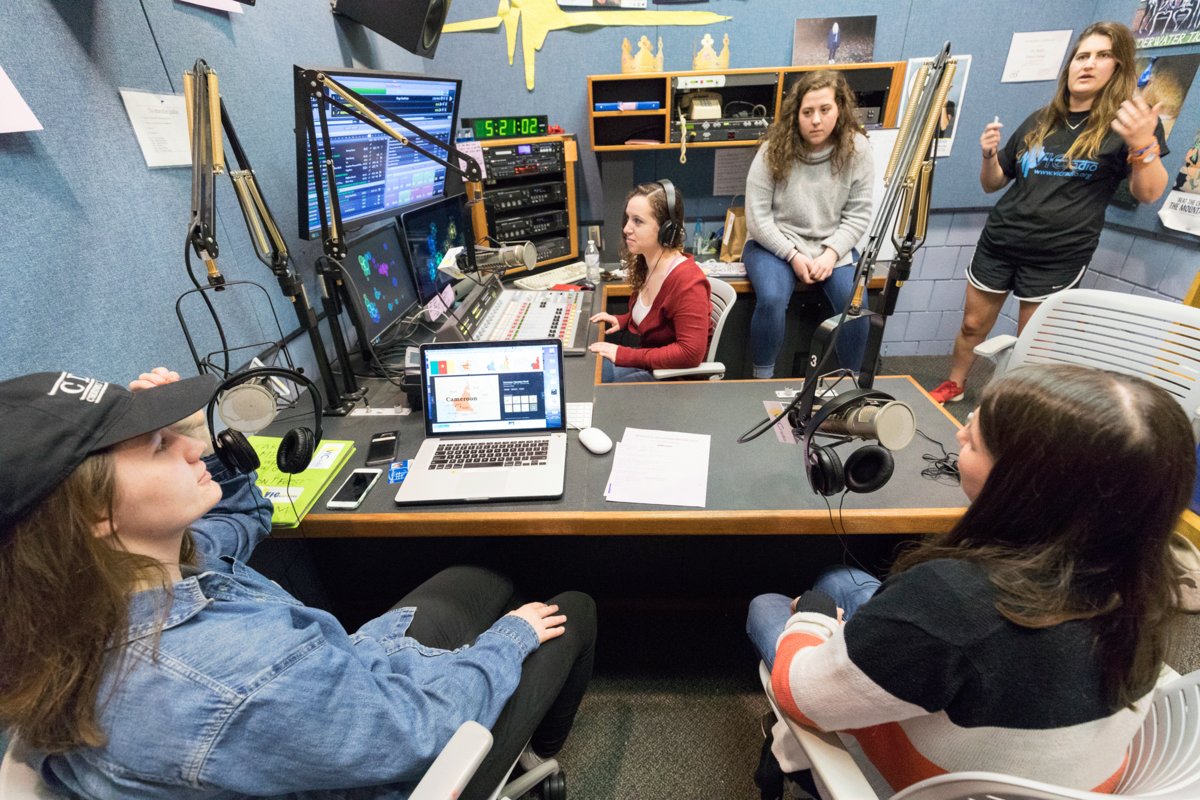 Students in the VIC studio during the 50-Hour Marathon

When you’re as dedicated and hard-working as the students in Ithaca College’s prestigious School of Music, eventually, you’re going to need to cut loose and have some fun. Enter Ford Fest, which occurs in December as a way to celebrate graduating seniors. Considered by many music alumni to be their favorite memory from their time on campus, Ford Fest features off the-wall ensembles like a tuba choir and hilarious skits from students and faculty members.

In 1970, former professor emeritus of cinema and photography Gustav “Skip” Landen came up with the idea of the Golden Doorknobs film festival. The fest required film students to make a short, silent, black-and-white film showcasing the most imaginative way to kill someone with a doorknob. After ending with Landen’s retirement in 1991, the contest was revived in 2009 and opened to all students in the Park School. The films are judged by a panel of faculty members and industry alumni, and monetary prizes are awarded.

Traditions and athletic teams go hand-in-hand. But few traditions are as unique as the one created by members of the women’s cross-country team. Since 2009, squad members have tattooed “ICXC” on the inside of their bottom lips. While not permanent, the tattoos last for about seven years and are a symbol of the long-lasting bond between teammates.

Every Halloween since 1989, Ithaca College students have paid homage to the 1975 cult classic starring Tim Curry and Susan Sarandon by putting on a live-action performance of the film for a captivated audience. The show, which encourages participation by the audience, is currently put on by members of the Macabre Theatre Ensemble.

For 20 years, the college has held this symposium, which allows students—with the help of a faculty mentor—the opportunity to present research on a topic that they find interesting. The symposium is named after former college president James J. Whalen, who was renowned for fostering students’ creative identities.

Students presenting a poster at the Whalen Symposium

Lights on the Tower for New Years Eve

This tradition, which began in 1965, was the bright idea of the college’s then head of facilities. Workers place bulbs in the windowsills of certain rooms in the college’s iconic Towers residence halls, which, when lit, display the two-digit year. When the clock strikes midnight, certain bulbs are turned off, while others are lit to display the new year. The resulting display is visible across the entire town, and is a point of pride for many of the students whose rooms shine a little brighter in the new year.

What do you get when you take two football teams separated by only 24 miles and add in a jug bought at a yard sale in 1959? An intense rivalry that’s continued for decades. The Bombers and the Red Dragons meet every year for the Jug, with Ithaca holding an all-time lead of 35-24. This fall, Ithaca reclaimed the trophy after a seven-year hiatus behind new head coach Dan Swanstrom and first-year quarterback Wahid Nabi, who etched his name into Cortaca lore by throwing a school-record six touchdowns in a 48-20 rout.