Up the Exposure: Photographing Untold Stories

Early on November 8, Lauren DeCicca ’11 waited at a polling station in Myanmar, also known as Burma. Enthusiastic voters began lining up as early as five o’clock in the morning to cast their votes in the country’s first truly democratic election in more than 50 years. Some had practiced for days for this moment, trying to ensure that their vote would be cast correctly and that this time it would finally count.


Above: Fishermen work on the banks of the Irrawaddy River, the "lifeblood" of Burma.

A woman asked DeCicca, a photojournalist, to snap a picture of her and her husband preparing to vote.

“This is history,” the woman told DeCicca, succinctly capturing the significance of the moment. As surely as their votes were being cast, so were the seeds of democracy.

While the line of voters was still forming, Aung San Suu Kyi, chairperson of the National League for Democracy (NLD), quietly made her way through the throngs of people and into the polling station in Yangon. A Nobel Peace Prize laureate, Suu Kyi was finally getting the chance to vote in a fair and free election in her home country. In 1990, Suu Kyi’s NLD party had won a national election, but the results had been disregarded by the ruling party, and Suu Kyi had spent 15 years under house arrest—a period during which she received dozens of international humanitarian awards.

Although a military-written constitution precludes Suu Kyi from being elected to the presidency, she may soon play an integral part in leading a country that has long been controlled by the very military that had arrested her years ago.

And DeCicca was there to record the moment. In the same way people had been witnesses to history during the signing of the Declaration of Independence, the storming of the Bastille, and the fall of the Berlin Wall, she helped document the first accounts of Burma’s democratic efforts and captured the hopes of a nation.

DeCicca said, “I realized that, politics aside, Burmese people were finally given hope that democracy, though slow to form, would finally have a chance to grow in their country.” 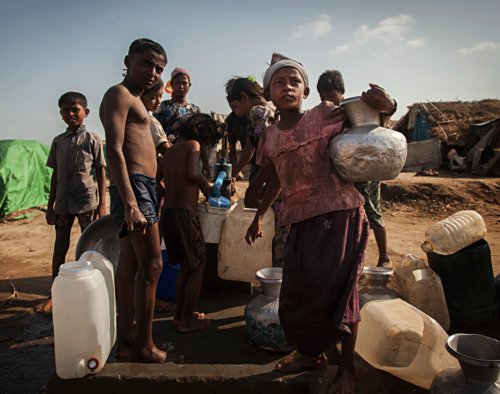 DeCicca was covering the story in Myanmar for the Wall Street Journal and Getty Images, as well as for several European publications. But unlike some of the journalists who had traveled there just to cover the election, DeCicca has been working as a freelance photographer in Myanmar since 2012. So, while most of the journalists were focusing on Suu Kyi and the flawed reform process, DeCicca decided to take a step back to focus on what the election meant for the everyday person.

“The enthusiasm and excitement was contagious throughout the week as people cheered and celebrated alongside their families,” DeCicca said. “It was the most incredible and powerful experience I've had in Myanmar.”

Not all of her experiences in the country have been so joyous.

One night in April, DeCicca was photographing freelance miners at a Chinese-run copper mine. The mine had been the focus of  international scrutiny after a violent land grab displaced local farmers and miners. DeCicca was following miners who regularly climb a mountain late at night to collect small boulders from which they sift tiny amounts of copper— barely enough to support their families.

While DeCicca and the local miners were on the mountain, Chinese workers stopped in a corporate truck and began shining their flashlights up the mountain. One of the locals quickly pushed DeCicca behind a bush and then ran down the mountain with other miners. Before leaving, a small child whispered to her, “Cannot go.” She knew they wanted her to stay hidden for her own safety, but, as scared as she was, she also knew the locals had far more to fear.

“Once the coast was clear, I was able to safely leave the copper mine, but the fear that I felt from the miners was extremely palpable,” she said. “They live with the fear of being arrested or fined every day in order to make just $150 per month for their families. The inequalities and corruption that I see in Burma will never stop surprising me.”

DeCicca graduated from IC with two majors—one in art and the other in cinema and photography. But she said her political science courses at IC were what piqued her interest in developing countries and has informed her work in Burma.

Soon after graduating from IC, she moved to New York City to work as a freelance photographer. While she was in New York City, Myanmar reopened, ending the country’s economic, political, and social isolation, and DeCicca saw an opportunity to document the country’s transition to democracy after more than 50 years of military dictatorship. She booked a round-trip ticket, planning to  three months abroad. But almost three years later, she still hasn’t moved back to the United States.

“While most journalists around the world, specifically in Southeast Asia, are photographing aftermath stories,such as the effects of the Vietnam War and the Khmer Rouge, Burma is on the cusp of change,” she said. “And the work we do as journalists could actually have a hand in how the country develops.”

“The reason I was drawn to photography in the first place was because of the strong power it has to bring people together and allow others to empathize,” she said.

While at IC, DeCicca worked as a photographer for IC Fuse, the college’s magazine for prospective students, and the Ithacan, the award-winning student-run newspaper.

“The work ethic instilled in me through the daily assignments at both of these publications is what pushed me forward in my career,” she said. “At Fuse and the Ithacan, a high level of professionalism was required, which meant meeting deadlines and thinking creatively while taking on many assignments.”

This hard work has paid off. Last year, one of her photos was named by Time magazine as one of “29 Instagrams that defined the world in 2014.” Such international attention means a lot to her, but her focus remains on Myanmar.

Though she expects the reform process to be slow, she’s glad that the older citizens of the country can now at least hope that their children and grandchildren will live to see a truly democratic country. 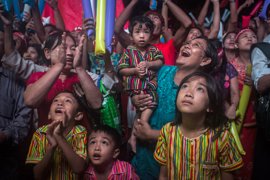 Above, a man works near the Letpadaung Copper Mine. Thousands have been evicted from their land to create the mine.