Newtown, Connecticut never wanted to be partly known as the home of one of the largest mass shootings in U.S. history. But it is. It is, and the people of the town can only try to find a way towards some healing, despite the horrific events of December 14, 2012.

Long-time theater director Michael Unger ’83, who graduated from Ithaca College with a degree in drama and passionately believes that the performing arts have the ability to heal, was challenged with helping children of Newtown put on theater performances . In fact, Unger expresses this just as he’s getting ready to start rehearsals for A Christmas Carol: “You see these young people and what they’ve been through…Having something like this to put their energies in, having this goal, you hope it will provide some relief.”

He also has brought in impressive Broadway talent to perform with them, both to help the quality of the shows but also giving the children one more reminder of just how many people care. “We couldn’t have come this far without the incredibly generous spirit we’ve seen,” Unger says.

And the vision actually started with Dr. Michael Baroody, who lives in Newtown and started the 1214 Foundation to help those affected by the tragedy. He felt a performing branch of the foundation could be a way to have a cathartic outcome for children affected and knew it required someone with a strong ability to encourage them to new heights in a positive way. Unger seemed to fit the bill as he had already successfully directed a benefit for Sandy Hook at the Palace Performing Arts Theater in Waterbury, Connecticut—with an approximate 40-piece orchestra featuring Broadway players, and Broadway stars taking to the stage, including Michael Cerveris and Richard Kind, it also had around 100 Newtown children perform.

Roughly 10 weeks after Baroody and Unger discussed working together, the first show for the foundation’s branch, known as NewArts, opened in the summer of 2013.

“Unger was the right person to bring excellence and inspire these kids,” Baroody says. “He’s also very thoughtful in choosing the right shows. The first for us was Seussical (featuring Newtown children performers and Broadway star John Tartaglia)—it was the right choice because it said no matter how small you are that you’re important. That’s a perfect message. There’s a purpose behind everything the kids do—he’s good at encouraging them to be themselves within the character.”

Unger, who is the Producing Artistic Director for NewArts, stresses that the top goal isn’t to bring about future Broadway talent, but to instill confidence and help with healing. “I will say it’s fun when you see them realize how good they can be,” he says. “They find something that they may never have known they had. When you see that in their eyes, it’s special.”

The hope is that eventually enough money will be raised to open a performing arts center for the town. “If we could do that,” Unger says, “it would be just one more way to say that love can win.”

But, to Baroody, it’s also the town that’s won through Unger’s commitment. “Michael Unger has changed the direction of kids’ lives, and we’ll only know the exponential effect in time—all the people that have found deeper strength through him affecting them,” Baroody says. “You don’t meet people every day who care like that. But that’s Michael Unger.” 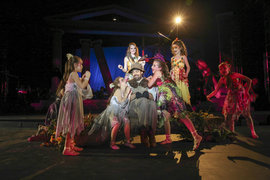 Children performing in a 1214 Foundation production of 'A Rockin' Midsummer Night's Dream.'