When Sergeant Harry Ruzika’s vehicle was hit by an improvised explosive device in Afghanistan, he was trapped under his vehicle in a river. He suffered many physical injuries as a result, including a below-the-knee amputation to his left leg, but his anxiety about being in the water held him back more.

This past summer, Holly Roselle, M.S. ’05, helped Ruzika overcome his fear of the water to compete in the Warrior Games and take home two medals in swimming.

Roselle is a performance enhancement specialist at the Walter Reed Medical Center in Washington, D.C., working full time with injured veterans. She is also the coach for the Army swim team at the Warrior Games, a competition for injured veterans held at the U.S. Olympic Complex training facility in Colorado Springs, Colorado. Each branch of the military fields a team of injured veterans, and each sport has different injury categories (like above-the-elbow amputation, traumatic brain injury, or spinal cord injury). The first games were held in 2010, and Roselle served as the official sports psychologist for the event.

“Every single one of the athletes had a challenge to overcome to be at the games, let alone be competing in a physical competition,” she says. “They fed off each other to take their swimming to another level.”

This year the Army swim team won 18 medals — the highest medal count in swimming. But the competition is about more than just medals.

All of the soldiers who participate in the Warrior Games have been injured in Operation Iraqi Freedom or Operation Enduring Freedom in Afghanistan.

“The Warrior Games event helps these soldiers identify and focus on the incredible things that they can do,” Roselle says. “The games also offer the camaraderie of competing as a team and representing the Army, which is valuable for all of them. By taking on new challenges and accomplishing new things individually and as a team, participants in this competition increase their confidence, motivation, and excitement for the future.”

Another Army swimmer, Staff Sergeant Stefanie Mason, was injured in Afghanistan when her vehicle hit a cement wall at 60 miles per hour. She suffered a severe traumatic brain injury and many physical injuries. One day Roselle noticed Mason swimming in the pool and told her she should compete at the Warrior Games. The idea got Mason motivated and, as she trained, her health improved dramatically. She also won two gold medals and one silver at the games.

“She was an inspiration to us all,” Roselle says. “This is an example of the Warrior Games as an opportunity to build physical and mental strength that can be applied to a successful future.”

The Warrior Games is now an annual event, and Roselle plans on being back with a team in Colorado Springs next year. 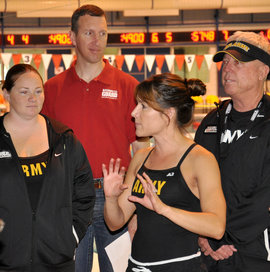