Fresh out of college with a bachelor’s degree in television-radio, Jill Agostino ’86 began her long career in newspapers covering sports and town news at a weekly paper in the Catskills. Her dream job back then was working for a daily newspaper — any daily newspaper that would take her.

“I always thought that if I got a job at the Albany Times-Union, I had made it,” said Agostino.

“It’s both figuring how we’re covering events and handling things on the web, but also figuring out the transition from covering news all day on the web to what do we do in the paper,” said Agostino.

Although familiar with politics, Agostino is not a politics expert. What she brought to Washington was her newspaper knowledge and business savvy.

“I don’t know Washington that well,” said Agostino when she first took the job. “What I do know is what makes a good story, how to get things up on the web — and what I was able to bring to Washington was how New York works.”

Before moving to Washington, Agostino served in a variety of positions at the Times’ New York office. She started in sports as a copy editor in 1996 after leaving a short-lived position at New York’s Daily News. Agostino had offers from both papers when her job at Newsday shut down six months prior, but she decided to go with the Daily News because the publication had a better sports section. When her hiring supervisor left six months later, the Times called again.

“I decided you can turn down the New York Times once — but probably not twice,” said Agostino.

For almost nine years, Agostino moved up the ranks in the sports section as a content editor, weekend editor, and assistant editor. She then went to the travel section as the assistant editor, where she redesigned the section. After that, she took a position in special sections as the deputy editor for business-based content. Then she became the night news editor for the web, where she aided in the creation of hyper-local pages in the San Francisco Bay area, Texas, and Chicago. Agostino attributes her success as an editor to the size of the New York Times.

“The great thing about the Times is it’s so big, you can have a lot of different careers all within the same building,” said Agostino.

Agostino doesn’t know what her next move will be — or whether that move will be within the New York Times or not — but right now, she’s learning everything she can in her new role.

“Every day, I’m amazed that I’m part of it, and it’s just fun,” Agostino said. “I’m not saying every day is sunshine and happiness, but it still is pretty cool. The pressure and the stress is ridiculous but the payoff and rewards — looking at the paper, looking at the website and knowing I played a small part in that is a really cool thing.” 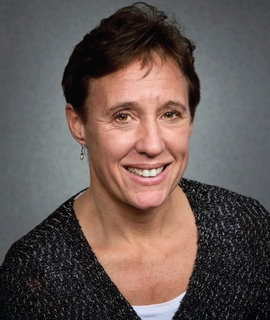 "You can turn down the New York Times once—but probably not twice."
– Jill Agostino '86