MLK Documentary - screening and conversation with the producers

SCREENING and Q&A Session:
With INFINITE HOPE:
MLK and The Civil Rights Movement

Thursday, February 21 at 7 pm at Cinemapolis featuring Q & A with filmmakers 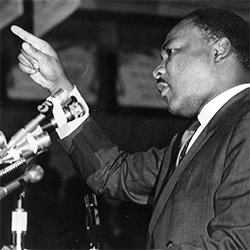 In October 2017, several students and faculty from Ithaca College’s Park School of Communications traveled to Memphis, Tennessee, to conduct interviews for a documentary to commemorate the life, leadership, and legacy of The Rev. Dr. Martin Luther King, Jr. The documentary has aired over 300 times on more than 75 public-television stations across the country. You are invited to a screening of clips and a Q & A with the producers.

Community members with an interest in the history of the civil rights movement, oral history and documentary production, or in learning more about what it’s like to study communications at the collegiate level are should find this an interesting opportunity to get a behind-the-scenes look at the process and outcome of this project.

The screening is sponsored by the Roy H. Park School of Communications with generous support from community partner, WENY and Cinemapolis.