The 2017 Colonel Arnald Gabriel ’50 and ’51 Visiting Wind Conductor will appear in concert with the Ithaca College Wind Ensemble, Wind Symphony and Concert Band. This year’s guest is Dr. Thomas Lee, Professor and Director of Bands Emeritus at the University of California at Los Angeles.

Dr. Thomas Lee is Professor Emeritus, Director of Bands, Emeritus UCLA. Lee holds the Doctor of Musical Arts Degree in Conducting from the College-Conservatory of Music at the University of Cincinnati (1971), as well as two degrees from Drake University, Des Moines, Iowa, where he was a student of Don Marcouiller. Previous to his appointment at UCLA, he was the Founder/Conductor of the University of Texas Wind Ensemble in Austin and was director of the graduate program in Band Conducting. Before his appointment at Texas, Dr. Lee was founder/conductor of the Ohio University Wind Ensemble where he received a research grant to develop an innovative approach to teaching conducting through non-verbal communication. (1973) Since his arrival at UCLA in 1985, the UCLA Wind Ensemble received international acclaim as well as significant prominence for performances at national and regional conferences as well as well as recordings of important composers. Dr. Lee is especially known for musical performances as well as for creative programming, balancing both traditional and contemporary literature.

Individuals with disabilities requiring accommodation should call (607) 274-3717 or email ekibelsbeck@ithaca.edu/akemp1@ithaca.edu. We ask that requests for accommodations be made as much in advance of the event as possible. 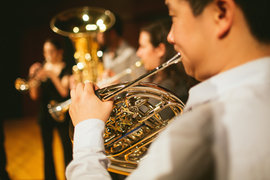