On Sunday, March 4, the winners of Ithaca College’s concerto competition will perform with the Ithaca College Symphony Orchestra at 4:00pm in Ford Hall.

Each winter, students in the School of Music compete in an annual concert competition, preparing and performing a concerto or major work for a panel of judges. Through a rigorous selection process, the faculty panel selected soprano Megan Jones, saxophonist Sara Mercurio, and pianist Ivan Yumagulov as this year’s winners.

Megan Jones (soprano) is a junior vocal performance major in the studio of Marc Webster from Pittsburg, Pennsylvania. She has been a part of Ithaca College’s Woman’s Chorale, Choir, three student-run productions, and last year’s production of La Clemenza di Tito. Jones coordinated a concert this past fall in the music school to raise awareness for mental health, and hopes to continue to use her voice to make people happy through performing and community outreach.

Sara Mercurio (saxophone) is currently double majoring in music and psychology, and studies saxophone with Steven Mauk. She is a member of the Wind Symphony, Jazz Repertory Ensemble, Saxophone Ensemble, and the Venia Saxophone Quartet. She is regularly involved in the music community of her hometown, West Islip, New York, where she mentors younger students and provides music lessons. In the future, Mercurio hopes to have a career in psychology, where she both provides support for people in need as well as healing through the redemptive qualities of music.

Ivan Yumagulov (piano) is a freshman majoring in piano performance and music education in the studio of Charis Dimaras. A native of Chelyabinsk, Russia, he started his musical education on accordion, and began studying piano when his family moved to the United States. Yumagulov has won numerous regional and international competitions, and has played at Carnegie’s Weill Recital Hall in New York City, the Artist Piano Centre, and St Paul’s Episcopal Cathedral in Syracuse, NY. A scholarship recipient and alumnus of Ithaca College’s and Indiana University’s Summer Piano Institutes, Yumagulov also plays the saxophone.

This concert is free and open to the public, and will webstreamed live and available on-demand several days after the event at www.ithaca.edu/music.

Individuals with disabilities requiring accommodations should contact the Office of Concerts and Facilities, School of Music, at 607-274-3717 or ekibelsbeck@ithaca.edu/akemp1@ithaca.edu. We ask that requests for accommodations be made as soon as possible. 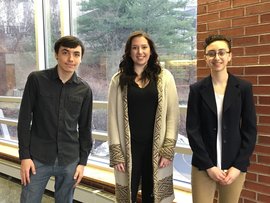