Be in the Know

IC View
ICView is published through the Ithaca College Office of Marketing Communications for alumni, parents of current students, employees, retirees, friends, peers, and neighbors of the College.

Fuse
Fuse is a student written publication for prospective students and their families. Its mission is to share real student photos and stories and to provide honest, accurate perspectives on Ithaca's academic programs, people, and student life.

Ithaca Library
The library's mission is to enhance teaching and learning at Ithaca College through the provision of flexible, diverse, and user-centered information services and resources. Don't start an important assignment or research project without them!

While there is no definite answer as to why that name came to be, the library archivist has put together an interesting history of how we think that name stuck! 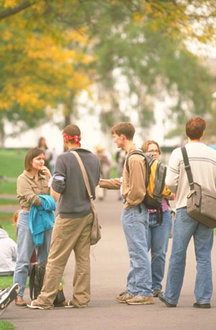