Posted by Kristen Tomkowid at 10:01AM 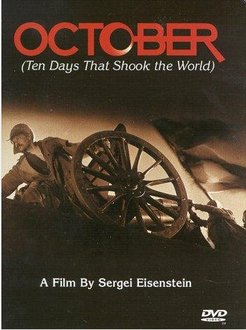 In October 1917, the Bolsheviks rose up to receive total power in Russia from the government. Before this could happen, much had to be done. The monarchy had to be overthrown and creating a need for a new leading body. This was to be a big year for the people of Russia.

Eleven years later, Sergei Eisenstein partnered with Grigori Aleksandrov to create October:Ten Days That Shook the World. Shot in a documentary style, this silent film depicts Russia during this time of turmoil. With a story covering from February 1917 to November the same year, everything is seen about this revolution. Since the filming was only a short time from the actual events, there is a realism that is added. Buildings are the same as they were during the revolution and many of the people in the film were actual participants, including Red Guards, soldiers and sailors, in the uprisings.

Rotten Tomatoes gave October an 86 out of 100 based on critics reviews and an 80 out of 100 based on audience reviews. Critics on the site say that although it may seem hard to watch in today's world, it is still an impressive piece of work and well worth the watch.

This year at FLEFF, Eisenstien's October will be one of the two silent films played. Since it is a silent film, it will be accompanied by Ithaca's own Cloud Chamber Orchestra. Watching October should prove to be an interesting experience since you will be seeing movies the way they were originally created to be seen.

How do you think it will be?