Behind the Scenes at FLEFF: Karen Rodriguez, Assistant to the Codirectors

Posted by Jessica Competiello at 11:05PM 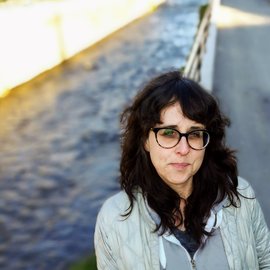 Karen Rodriguez, a local filmmaker and former Ithaca College professor, has contributed to FLEFF for many years and this year holds a new position as Assistant to the Codirectors.

With work ranging from the Cornell Lab of Ornithology to working with refugees in Vienna, a common theme that will develop during a conversation with Rodriguez is the importance of connection.

Rodriguez first became involved with FLEFF when she had the idea to add local talent and films to the festival programming. While working at Ithaca College at the time, she reached out to get the work of professors and local film makers included in the festival.

In her previous role, she did a lot of marketing to the local community for the different events. She reaches out to different spheres in the community to connect them to events that may be of interest to them. This type of local outreach boosts ticket sales and gets the local community more involved in the festival.

Rodriguez is eager to share her excitement about the week of FLEFF. As soon as she gets the program each year, she immediately sits down to go through it and circle each of the events she wants to go to.

She explains how the festival turns Ithaca’s tiny campus and local theater into a vibrant scene. With unique film screenings, musical performances, politically charged discussions, Q&As, and master classes, it brings in “audiences who are eager to explore and experience the festival themes.”

Rodriguez describes, “I have long enjoyed films that open my eyes to communities and stories that might not be visible in more mainstream media. For me, FLEFF is a real delight because of the thoughtful, engaging, and international films and artists that it brings to Ithaca.”

She continues explain how the festival allows students and the local community to connect with local, national, and international participants who they would not have access to in any other situation. This is the main reason why FLEFF is unique to Rodriguez.

Although all film festivals strive to bring in discussion and communication, FLEFF’s smaller nature gives it the ability to do it on a more intimate scale which could not occur at a massive film festival in a major city. Rodriguez appreciates how FLEFF gives access to students and community members to be able to personally go up and speak to those film makers.

One of these meaningful connections created by FLEFF that stood out to her was witnessing a conversation that occurred between a filmmaker, David Rocchio, and an Ithaca College Documentary Studies student.  The film screening was for “The Gun Shop,” a film about customers’ motives for purchasing guns in a gun shop in Michigan.

The student also recently created a film about gun violence and at the end of the Q&A they had an extensive conversation about their work, films, and interest. It was a meaningful and genuine conversation.

Her biggest piece of advice for anyone going to FLEFF is to “take in as much as you can,” meet people and interact, and especially get involved in the stimulating, charged conversations by thinking of questions ahead of time and raising your hand to jump in.