Behind the Scenes with Ann Michel

Posted by Jackie Marusiak at 8:49PM 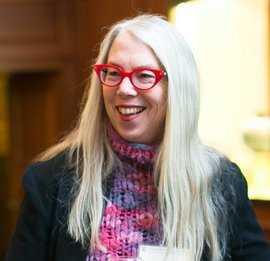 When you attend a live event, do you ever think about who’s in charge behind the scenes?

For 17 years, Michel has worked in collaboration with her husband, Philip Wilde, and Dr. Patricia Zimmermann to assemble the lighting and projections of FLEFF live music events.

The annual FLEFF Disruptions concert will occur on Tuesday, April 2 at 8:15 p.m. at Hockett Hall in the Whalen School of Music. This year, the concert features projections of the series Bronzeville Etudes and Riffs by Philip Mallory Jones.

Michel also owns the independent video production company Insights International, Inc. Recently the Institute for Educational Leadership hired Michel and Wilde to produce a series of short works about disability in the workplace, which will be featured at FLEFF this year.

The goal of the work is to “broaden the definition of what is normal.”

Michel didn’t always know she would be a filmmaker. She graduated from Cornell University with a degree in Theoretical Mathematics in 1982. But math and filmmaking turned out to be pretty similar.

“I found that being able to approach any aspect of filmmaking is not that different than solving a math problem. You get to the heart of the matter. You need to be very succinct,” Michel said.

Michel and Wilde’s work will screen at the session Disrupting Disability on Friday, April 7 at 10 a.m. in Job 160.

Of the FLEFF opening concert, Michel says, “It’s a bit of an extravaganza. Just prepare for a good time, and don’t expect anything. You’ll be surprised.”