Dissonance and Consonance: An Interview with Dr. Deborah Martin and Dr. Jairo Geronymo

Posted by Kayla Reopelle at 11:21PM 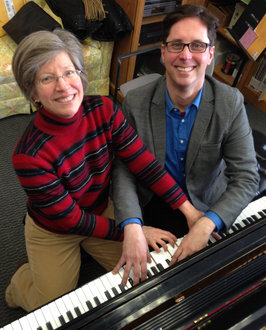 JG: Music is all about this tension and resolution.

DM: The tension between dissonance and consonance.

This year, the concert will focus on American Dissonance.

Dr. Martin and Dr. Geronymo did not start with this theme in mind.

For each concert, the duo starts with a core work that they would like to perform, and incorporate additional pieces that connect to the festival’s theme.

Though the pieces of music lean on consonance, the themes of the works remain dissonant.

This clash of themes comes through in the juxtaposition of the Shaker-Quaker tune, Simple Gifts, with the opening movement of a Bernstein pop-rock Catholic Mass.

The arrangement of the works also resonates with dissonance. Somewhere Over the Rainbow was not arranged by a music professor, but by Ithaca College’s Web Applications Architect, Ben Costello. Professor Nick DiEugenio's arrangement of the Star Spangled Banner includes influences from Jimi Hendrix and Arab drones.

Dr. Geronymo anticipates the juxtaposition between the film component of the concert, which was designed by Insights International and features American home movies, will encourage the audience to think about clashes inherent in American social and political life.

The idea of dissonance in music continues to evolve.

Chords that sound completely normal to us today, such as the seventh chord which proliferates jazz, would thrill audiences during Baroque times, often causing spectators to faint during Liszt concerts, Dr. Geronymo said.

Dissonance began to play a much larger role in popular music in the 80s and the 90s, numbing audiences to many dissonant sounds, but artists are starting to shift back to consonant themes, Dr. Martin said.

Dr. Martin and Dr. Geronymo demonstrated the evolution of dissonance for me during our interview:

JG: A piece of music without dissonance would be incredibly boring, so maybe it’s a question of embracing this dissonance and living with it that makes life and music and everything else more exciting.

The American Dissonance concert will be performed on Tuesday April 1 at 8:15pm in the Hockett Recital hall. Dr. Martin and Dr. Geronymo will play piano.