Posted by Jeremy Lovelett at 8:31PM 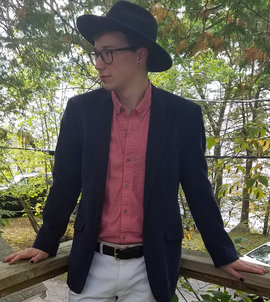 By Jeremy Lovelett, Bachelor of Music in Combination with an Outside Field in Writing, ’20, FLEFF Blogging Intern, Stormville, New York

Consider the layers of meaning generated when FLEFF 2020’s theme of infiltrations meets music. Within the list of example issues this theme engages sits the radical transformation that blues music exerted on American and European consciousness and musical traditions.

The blues originated with African American slaves and former slaves in the nineteenth century and has since influenced musical genres ubiquitously. Jazz, rock-and-roll, and hip-hop can all trace roots to the blues.

One FLEFF event will display this grand example of cultural infiltration in microcosm.

A family-friendly screening at Cinemapolis of Buster Keaton’s silent slapstick comedy, Our Hospitality, will do away with the 1923 score to instead feature the local Fall Creek Brass Band. This decade-old group of over a dozen rotating musicians plays a range of dance music, including traditional New Orleans, funk, hip-hop, and rock.

The blues then has infiltrated not only the band’s music but a theater and film.

The band engages with infiltrations when choosing which members play when, like at this moment in “Sweet Dreams.” The rhythm section settles into more complex patterns and the sousaphones hold the bassline. The trumpet, saxophone, and trombone players lower their instruments to holler lyrics and bust into harmony.

Human voices infiltrating the brass band’s sound instills a sense of community involvement, as if audience members could just as easily lend their voices and contribute to the music making. The blues tradition of call-and-response emerges throughout the band’s music and in this relationship with the audience.

Fall Creek Brass Band’s audiences inevitably engage with the music, if not with voice, with body. Their music’s relentless fun almost demands movement, and so the band will bring not only boisterous sound but perhaps dance into a Cinemapolis theater.

How better to explore this year’s theme than to watch as the blues continues its infiltrations?