Posted by Kristen Reid at 9:18PM 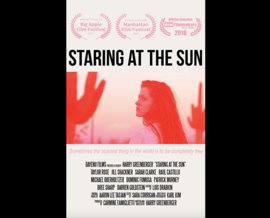 While all the FLEFF programming will be worth checking out, there simply isn’t enough time in the day to catch it all. Here’s a sneak peek at 5 of the events at Cinemapolis I'll be sure to attend:

Staring At The Sun is an award-winning film written and directed by Ithaca College alum, Harry Greenberger. The film is a coming of age story that follows two young Hasidic Jewish girls as they leave their homes and community, and set off on road trip across the country to discover themselves and the world. Staring at the Sun will play at Cinemapolis twice: first, on Thursday, April 4th at 7:10 p.m. with a discussion with Greenberger and the film’s editor, fellow IC alum Sara Corrigan, and then again on Friday, April 5th at 9:15 p.m. with a conversation with Greenberger.

Salome is a silent film based on the Oscar Wilde play of the same name in which Salome seduces her uncle Herod through dance. An extremely stylized film, this is often referred to as one of the first ‘art films’ made in the United States. Salome will play at Cinemapolis on Friday, April 5th at 7:30 p.m. with a special live music performance by Li’l Anne and the Hot Cheyenne.

On Saturday, April 6th at 11 a.m., Cinemapolis will be hosting a panel with many of the visiting filmmakers and guests, titled ‘Disrupting Everything’. This talk will be free of charge and will last 90 minutes. Guests such as Jacqueline Goss, Girish Shambu and many others will be hosting the discussion on disruptions and where we see them in our every day lives.

Another silent film with live music backing, El Ultimo Malon, a 1918 Argentinian film, will play at 7:30 p.m. on Saturday, April 6th. One of the oldest surviving films in the history of Argentine film, El Ultimo Malon was recently restored to 4K resolution and has never been shown in this United States in such high quality. Celebrating the 100-year anniversary of its release, Cloud Chamber Orchestra will accompany this moving film about the last Indigenous uprising in Argentina. Film Archivist Andres Levinson will join us in discussion following the screening.

Exploring the harsh realities of war in a unique way, Swing Kids tells the story of a group of prisoners of war, desperate for something to distract them, who decide to host a dance recital. The film is written and directed by Hyeong-Cheol Kang and is an upbeat, high energy musical. Swing Kids will play at Cinemapolis on Wednesday, April 3rd at 4:10 p.m. as well as Thursday, April 4th at 9:15 p.m.