Posted by Andrew Hallenberg at 12:58AM 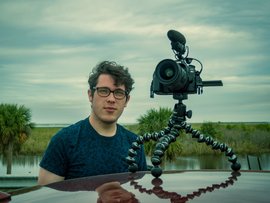 It’s been one month since I started blogging for the Finger Lakes Environmental Film Festival. This internship continues to provide a stark contrast to my usual film, photography, and visual arts courses.

Our blogging class has allowed me to discover a new fascination for a market which had always remained a mystery to me: the film festival industry.

I'd like to spotlight what I have found to be the most relevant and influential facts about the festival industry.

1. Just like this year's theme, film festivals are all about geographies. A festival's location can be used to strategically pinpoint a target audience. While festivals such as Sundance cater to a Hollywood driven market, FLEFF's permanent location in Ithaca ensures that the media showcased is met with intelligent discussion and discourse of equal, if not higher, importance. Between the student and faculty population of Ithaca College & Cornell University, the FLEFF audience is eager to engage.

2. Festivals, just like any other market, are an industry that needs to maintain revenue in order to remain sustainable and successful. Coordinating a film festival is a year-round engagement. Key coordinators travel to screenings and festivals around the world to seal deals with producers.

3. While mainstream cinema attempts to appeal to the largest audience possible, festival films aim to spark discourse regarding a particular topic or issue. One would struggle to find a festival film that's as easy to relate to as anything you'd find at your local multiplex. Festival films challenge our normality, they bring us out of our comfort zone.

4. Through our readings and seminar discussions I have learned that the selection process of choosing films varies from festival to festival. Each festival is different and is shaped by its curation process. The curation process itself is an extensive, meticulous process. Each piece of media requires layers of approval by the festival's team.

5. Most importantly, I've learned that the people make the festival. A screening is nothing without an audience. The environment in which creators and intellectuals can openly discuss topics that vary from new media, to documentary production cannot be replicated anywhere else.

After one month, I have found myself with a new appreciation and fascination for an industry that until now remained in the dark.