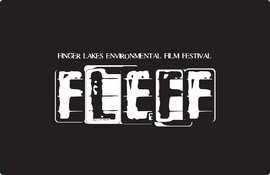 In her book Film Festivals From European Geopolitics to Global Cinephilia Marijke De Valck observes that film festivals demand contributors with a mix of skills like designing, coordinating, and organizing.

1.) Jenny Stockdale works on marketing, PR and branding at FLEFF.  She and the marketing team convey complex ideas (like Habitats) succinctly in order to sidestep short attention spans.

The poster features cotton and cancer cells that have been magnified to the point of pattern and geometry.  Conceptually the images for the FLEFF marketing steer towards the abstract because it stirs interpretation and analysis.

The move towards images with broader connotations matches FLEFF's own changes.  These changes include a wide-ranging view of sustainability.

2.) Dr. Tanya Saunders helped shift the Festival to the UNESCO definition of sustainability.  This definition covers biodiversity in addition to gender equality and sustainable urbanization.  To read more about the evolution of FLEFF check out blogger Kimberly Capehart’s profile on Dr. Saunders.

3.) Dr. Carla Golden taught gender studies at Smith College before she brought the course to Ithaca.  "I give a lot more thought how to get students to know what's going on outside."  she says.  She posits classrooms can be "ivory towers" that insulate students from the outside world.

4.) Lazin, a former student of Golden's, got nominated for an academy award for her documentary Tupac: Resurrection in 2005.  Dr. Golden brought Lazin to this year's FLEFF.  Lauren Lazin's new film, called The L-Word in Mississippi looks at lesbians in the South, many of whom felt pressured to "pray away the gay."

5.) When newcomers to festivals view a film they often take its journey to the festival for granted.  Karin Chein, from the independent film distributor dGenerate Films, brings in films the Mainland Chinese government banned.  Films such as Before the Flood (by Li Yifan and Yan Yu) which portrays the forced movement of local residents to make way for China's Three Gorges Dam.  Films like Before the Flood cannot be mailed due to censorship.  Chein carried the DVDs in her suitcase from China to FLEFF.

Each of these people fulfill a different niche in the festival's clockwork.

What other roles have you noticed at FLEFF?