Posted by Thomas Ball at 7:40PM 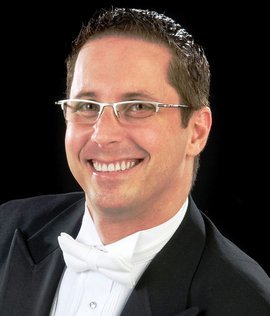 When listening to the piano compositions chosen and performed at the concert, Geronymo speaks across language borders.

His performances cross borders and through regions all over the world. He connects these places using the language of music.

In talking with Jairo, the pianist maps out the path of his musical legacy.

Jairo Geronymo began playing piano at the age of eight. His formal training began in his birth country of Brazil at the Conservatorio Musical. Continuing his education, Jairo studied at Sao Paulo University, then later at Arizona State University and the University of Washington.

Throughout his studies, Jairo’s concentration focused on the practice of sight reading.

Geronymo describes sight reading as an educational tool. In short, the study of sight reading allows one to look at a sheet of music and be able to accompany other musicians.

Sight reading acts as a means of, “survival” for musicians and accompanists. Those who sight read well can quickly process new textual information. This allows a player to improvise in order to perform in emergency situations.

Jairo recounted a time in which he judged a musical competition in Berlin. Two contestants, a father and daughter team, were to perform. The daughter, an eight year old musician, played violin while her father accompanied her on the piano.

Before the two could perform, the father took ill. Unable to find an alternate, Jairo volunteered to accompany the young violinist.

With no prior experience with the material, Jairo used sight reading in order to adapt to the situation.

In exploring his own experiences as a young musician, Jairo confessed that he learned to sight read as he found his own musical abilities lacking.

Now Jairo plays chamber music around the world, touring in Brazil, the United States, Israel, England, as well as Germany. He currently resides in Berlin, where he now teaches sight reading.

Along with his work in performance, Jairo’s academic accomplishments also garnered him acclaim.

Breitkopf, the largest and oldest publisher in Germany, print and distribute Jairo’s books on sight reading. The publisher owns the copyrights to a number of the most celebrated composers, most notably Johann Sebastian Bach.

The language of music stretches all over the world, but Jairo does point out that certain compositions have specific connections to their countries of origin. For example, the piece Appalachian Springs, “speaks to the American Soul”.

The composition, originally written by Aaron Copeland, corresponds with the story of the Christian Shaker sect and early American life.

However, when playing compositions outside of their country of origin, Jairo says that cultural differences only reduce 5% of a piece’s original intent, leaving 95% intact.

When playing in a new country, the classical compositions enter a new cultural space. However, the emotion and the character of the piece

In discussing the theme of Geographies, Jairo expanded the theme to include the Geographies of the mind. Within the mind, “you have different cultures, different regions”. He describes his performances as, “a trip within those different emotional cultures”.

Jairo Geronymo maintains positions as a professor, a performer and an explorer, using methods of navigation that need no map.