Posted by William Hopper at 5:10PM 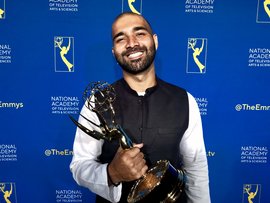 By Will Hopper, Cinema and Photography with a minor in Honors, '22, FLEFF blogging intern, Harvard, Massachusetts

In September 2019, Asad Faruqi won the Outstanding Politics and Government Documentary Emmy Award for his film Armed With Faith (Faruqi, Gandbhir, 2018). The film marked his first time directing a feature length documentary.
Faruqi grew up with a passion for photography. His interests primarily involved war photography.
As he pursued his passion, Faruqi eventually found himself working on documentaries. He reflects, “It was something that I was always very comfortable with. Holding the camera and being in a situation as an eye to the art form.”
Satiyajit Ray, a prominent Indian writer, director, and composer, is one of Faruqi’s favorite filmmakers. Faruqi references Ray’s work when telling his own stories, and it inspires his stories about people in the Eastern parts of the world.
Many other artists also influence Faruqi’s work. He takes inspiration from photographers, such as James Natchwey and Robert Capa, as well as famous painters.
While venturing into cinematography, Faruqi met the director Sharmeen Obaid-Chinoy. They worked on several films together, including Saving Face (Junge, Obaid-Chinoy, 2012) and A Girl in the River: The Price of Forgiveness (Obaid-Chinoy, 2015). Both films won an Academy Award and Emmy Award, as well as receiving other awards and nominations.
Faruqi worked with Geeta Gandbhir on the documentary A Journey of a Thousand Miles: Peacekeepers (Gandbhir, Obaid-Chinoy, 2015). Gandbhir co-directed the film with Obaid-Chinoy. Faruqi and Gandbhir later co-directed Armed With Faith, a documentary about a Bomb Disposal Unit at the front lines of a war against the Taliban.
Armed With Faith is also a FLEFF project cosponsored with the Fulbright Association.
In addition to directing, Faruqi also worked as the cinematographer for the film. When filming, the entire crew only consisted of Faruqi himself. He managed all the sound, shooting, directing, and producing as he followed the members of the Khyber Pakhtunkhwa Bomb Disposal Unit (KPK BDU).
Faruqi found that doing everything himself “gave a different kind of access and different ability to shoot because when you’re the only person there, you can move the camera anywhere, so there’s a lot more freedom.”
Over the course of filming the documentary, Faruqi balanced working on other projects as well. In Pakistan, he traveled back and forth between the north, where the filming took place, and the south, where he lived.
It took three years to finish shooting the documentary. Faruqi worked on several other projects between the times he spent with the Bomb Disposal Unit.
From the time they spent together when filming, Faruqi and KPK BDU grew to trust each other. This became important when filming in situations that put them in danger, as anything could happen during those moments.
Faruqi grew up watching documentaries about the US military in the Middle East and the war on terror, but he didn’t see himself in their point of view. This resulted in making Armed With Faith. He notes, “I wanted to tell a story where I was there, and that is what compelled me to pick up the camera and tell the story.”
Faruqi continues to direct occasionally along with his cinematography. His latest film, currently in post-production, follows a Pakistani boy and a Czech girl and their digital relationship. He explains that “it’s about their relationship in a digital world, in a world that’s connected, in a world that has physical borders that are hard to get past.”
Tags: Asad Faruqi, cinematography, Director, Documentary, Emmy Award, FLEFF, Pakistan