Posted by Shea Lynch at 3:21PM 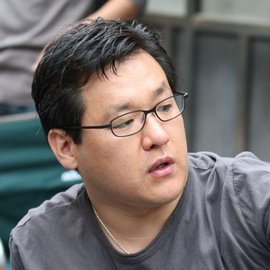 Blog posting written by Shea Lynch, Documentary Studies ’13, FLEFF Intern, Glens Falls, New York
“My films are not just a comedy.  They have a combined generic element.  For example, I added many action or even horror film elements to my comedy.  I believe that this combined generic elements really created my own cinematic vision in the film and the comedy is the one that can be really mixed with other generic element.”
Highly-respected and very successful Korean filmmaker Yong-ki Jeong will be showing his films Once Upon a Time and Couples; which combine comedy and action in innovative ways. The director will also present two on-campus workshops for students and faculty.
SL: Can you describe the film industry in Korea?
YJ: In Korea, there are around 150 film productions per year in the film industry.  Based on the research on Korean film industry in 2011, Korean film market is number 10 in the world in terms of the entire gross in the market and the Korean films’ market share is more than 60%, which is pretty amazing considering the Hollywood films’ ticket powers in the world.
The countries that has more than 50% market share of their own films are U.S.A, China, India, Japan, and Korea.  The total number of audiences who watched the Korean films in Korea was more than 100,000,000 per year for last two years.  The Korean population is 50,000,000, so each Korean person at least watches two Korean films per year.  If we exclude the children and elders, this means that one Korean watches 4-5 Korean films per year.
SL: How do you think the theme of MOBILITIES connects with Korean cinema?
YJ: Regarding the theme of MOBILITIES, I’d like mention two major things.  First, Korea has very advanced IT (Information Technology). Most of children even have mobile devices including the smart phones and Tablet PC and the Internet speed is so fast.  So, most of Korean can easily watch films on their mobile devices even in subway.  Secondly, since IT became a key in the Korean culture, many Korean films have this component in the contents of the film, too.  For example, the main characters are connected in the films through the mobile device.  So, the contents of the Korean films reflect this new Korean culture.
SL: Can you give us a quick preview of the two workshops you will be teaching at Ithaca College?
YJ: I make a film to communicate with people, not to force my idea or vision to them.  In a similar way, I’d like to communicate with the audience who will join the workshop.  Instead of lecturing, I’d like to answer their questions and also I’d like to ask questions.  It should be a two-way traffic to communicate well.  I hope people will ask me many questions so in that way, I can share my experience and thoughts that they want to know.
Event Schedule:
Thursday April 4
1:10 p.m. Park Auditorium
On-campus Workshop
Friday April 5 at Cinemapolis
7:20 p.m.
Couples
Saturday April 6 at Cinemapolis
7:10 p.m.
Once Upon a Time
9:30 p.m.
Couples
Tags: Couples, Korean Cinema, Once Upon a Time, Yong ki Jeong