Posted by Shea Lynch at 4:47PM 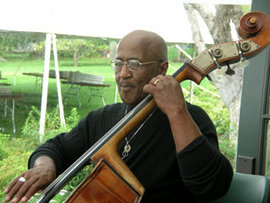 The Bernie Upson Quartet will be playing FLEFF After Party, Friday, April 5 at 8:30 p.m. at the Chanticleer in the Commons.

My first time hearing The Bernie Upson Quartet was on the syndicated radio station Crossing Borders LIVE here in Ithaca. I was never really a fan of jazz until coming to Ithaca for college, now realizing there is a huge jazz following. The Bernie Upson Quartet is rhythmic jazz that is almost poetic, shifting emotions throughout, with sax, drums, bass and piano.

The Bernie Upson Quartet is an Ithaca staple, consisting of: Bernie Upson on bass, Dino Losito on piano, Chuck Leo on sax, and Al Harland on drums.

Q: What is your background?

Bernie Upson: I grew up in Harlem surrounded by music. I worked at the Apollo for a few years. I played with Diana Ross & the Supremes when they first came in from Detroit. I played bass for the shows at the Apollo, including Patty Labelle.

Deb Clover: He’s been doing this since he was 18. Ithaca’s lucky he decided to settle here. He lived around the corner from Count Basie when he was a kid. Growing up in Harlem he was around a lot of great musicians.

He made friends with Joe Henderson in service and they formed an army jazz band. They traveled all over the South where they were stationed. It was still so segregated. They would play in a club where they couldn’t walk in the front door.