Posted by Chloe Wilson at 2:39PM 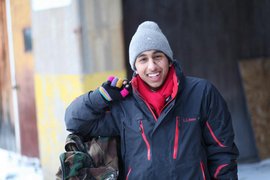 FLEFF 2012 is still a ways away, but last Sunday (unofficially) kicked things off with a screening of OKA!.  We had a full house and a great talkback with the director, Lavinia Currier.  Not only was it awesome to hear about the true story behind the film, but learning about the global issues the film shows was a great experience.

Us interns, meanwhile, have been busy learning about and planning FLEFF events!  I caught up with Gautam Singhani, Team Leader, and asked him about his FLEFF experiences and why he chose to work at FLEFF 2012.

Gautam Singhani: Last year, I had a suberb time helping organize the film festival and publicizing events as a FLEFF intern.  I felt that there was much more that could be done to enrich the film festival experience, which is what drove me to apply as a Team Leader.  I have many ideas on how to promote FLEFF, and I hope to implement them in order to help the festival grow.

CW: What was one of your more memorable experiences from FLEFF 2011?

GS: Meeting with the directors of some of the films last year was really valuable.  I was able to interact, ask questions, and hold very intellectual conversations with them.  I learned a lot about film making, but I was also able to network by simply holding conversations and listening to [the directors'] ideas and opinions.

GS: Last year, I worked mainly as a projectionist.  While striking equipment and packing up gear after an event, I got to interact with some of the performers and directors.  I always found what they had to say about their own performances or films interesting.  But what I really enjoyed was being asked to escort the directors and performers to nightclubs after their performances.  There's no better sight than to see directors rocking it out on the dance floor!

CW: Are there any new changes that are coming to FLEFF 2012 that FLEFFers should look out for?

GS: FLEFF interns will be creating a huge recyclable art installation* on the Ithaca College campus to publicize FLEFF's theme this year- microtopias.  We have also modified our advertising strategy to attract a larger audience and set ourselves apart from other film festivals.

GS: Get involved with ALL of the events that take place and actively participate in discussions after panels and screenings.  Everyone can gain valuable information by interacting with directors and by asking questions during the event.  (I also highly recommend interns to stay after events and observe, if not help the directors and performers after events.  That interaction can help develop something further.)

And that's one of this year's FLEFF team leaders!  Do you have anybody you want to hear from, FLEFFers?  Sound off below!

*Our art installation won't look like these pieces... but seriously how cool are these?! It's amazing what you can do with recyclable materials!