FLEFF Top Three - Films To Look Out For At Cinemapolis

Posted by Amber Thibault at 8:05PM 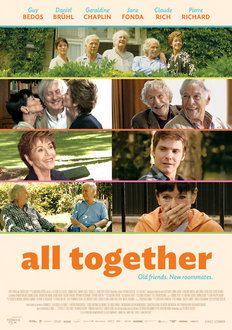 The first film I would like to see is All Together. It's a French comedy about five old friends who decided to live together to avoid having to move into a retirement home. The twist? A young ethnology student requests to live with them in order complete his degree with a thesis on the aging population. This film stars Jane Fonda, Pierre Richard, Claude Rich, Geraldine Chaplin, Daniel Brühl and Guy Bedos. This distributor Rodrigo Brandao will be attending the festival. This is a clever and enticing comedy about the life's later years that you are not going to want to miss!

The second film I'd like to see is a little more serious. It's called Everyone's Child. It depicts the story of two children who are forced into early adulthood after their parents are killed by AIDS. Their uncle sells their plow and cattle to pay for their father's debts and the older brother and sister, Tamari and Itai, are forced to find a way to support their younger siblings. This is a thoughtful and heart-wrenching film about the triumph of human condition in the face of tragedy. Filmmaker Tsitsi Dargarembga will be attending the festival!

The third film I would like to engage in is AKA Doc Pomus, a documentary about successful songwriter Doc Pomus. He is known for writing much of the popular music that we still remember today, from big band music and classic rock and roll to love songs and classic R&B. Some of his credits include Save the Last Dance performed by The Drifters, Hushabye performed by the Beach Boys, and Lonely Avenue performed by Ray Charles along. If you like any of the songs you should check out this behind the scenes look at the life of Doc Pomus. Director Peter Miller will be attending the festival!

Don't forget to purchase you FLEFF passes at the Ithaca College Bookstore or downtown at Cinemapolis. One pass will get you into FIVE FILMS! $20 dollar discounted price for students and $40 for all other FLEFF fans.

So many films to see, so little time! Which will you choose to partake in?