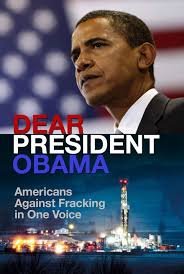 Have you ever been laughed at by a movie theater full of environmentalists?

I have. But it was worth it.

My first film on the Saturday of FLEFF weekend was Jon Bowermaster’s Dear President Obama. Watching this film made me cognizant of several arguments against hydraulic fracturing (fracking).

First, Bowermaster claims fracking releases more methane, and consequently, Co2 into the air than burning coal does. So, President Obama’s declaration of war on the less-harmful fossil fuel is counterintuitive to climate justice.

Bowermaster contends the economic boom from fracking is a myth. In his words, “Boomtown goes Bust” every time. His film shows fracking initially attacting a plethora of jobs to communities. Once the “sweet spots” for gas drilling are exploited, and the harmful effects of drilling manifest in local communities, the jobs and economic benefits dry up. In short, fracking is neither economically nor environmentally sustainable.

Furthermore, Bowermaster also points out how government works in tandem with natural gas companies to exploit communities. He travels to a small town in Colorado where drilling occurs, even though residents voted to ban hydraulic fracturing. This is because the state government overrode this referendum, and forced fracking on the community against its will.

The fate of this Colorado town troubled me. How can we improve the state of our environment if government will not listen to its people? To me, the sensible solution for this is to limit the scope of the government, so that their power over the people does not extend too far.

I fleshed this out to Mr. Bowermaster, and asked if he had considered environmental justice from the lens of limiting government. His answer was short: “No.” This drew laughter from the audience, who seemed to agree with Mr. Bowermaster. “We just need the right people running the government to solve these problems.”

As the movie dispersed, I was approached by two audience members who asked me to clarify my statement. We went back and forth for about twenty minutes. I learned more about the environmental state of affairs in Pennsylvania, and shared with them more of my thoughts on free market environmentalism. While we initially disagreed, in the spirit of FLEFF, we grew and learned from each other in this different environment.

Yes, I was laughed at by a room of environmentalists.

And I would do it again.