Posted by Jackie Marusiak at 5:29PM 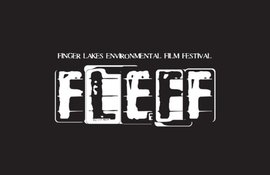 Over the course of the Finger Lakes Environmental Film Festival, more than 125 events will occur on and off campus, with plenty of opportunity to talk to filmmakers and scholars.

This year, FLEFF features even more. A new type of event, master classes, will occur Wednesday and Thursday from noon to 5 p.m. in Job 312.

Documentary filmmaker and installation artist Pawel Wojtasik directed two films featured at FLEFF this year. For End of Life, Wojtasik and his co-director John Bruce spent four years training to be doulas, people who work with individuals to help provide whatever a “good death” means to them. The film features five individuals in the process of dying.

The End and the Means, shot in Varanasi, India’s oldest and holiest city, focuses on work as devotion. The film features portraits of a broad range of laborers in India.

Wojtasik will conduct a shot-by-shot analysis of End of Life and discuss the filmmaking process in his master class on Wednesday, April 3 from 12:10 to 1:50 p.m.

Azzellini will discuss the series and the sociological principles behind it in his master class on Thursday, April 4 from 2:35 to 3:50 p.m.

Ithaca College alumni Harry Greenberger and Sara Corrigan collaborated on Staring at the Sun, featured at FLEFF this year. Written and directed by Greenberger and edited by Corrigan, the film tells the story of two Hasidic teenagers who run away from their families in Brooklyn.

Fleeing the strict rules of their community by driving their family car across America, the two teens construct new identities and discover what it means to be free.

Greenberger and Corrigan will conduct a shot-by-shot analysis in their master class on Wednesday, April 3 from 3 to 4:50 p.m.

Check out the full schedule of master classes for Wednesday and Thursday of FLEFF.