Posted by Kelsey Greene at 11:21PM 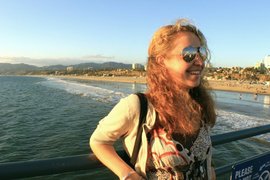 Recently, I had the chance to catch up with Brianne Riviello.  She is currently an assistant to the internship coordinators.  As a senior television radio major and integrated marketing and communications minor, Brianne has contributed a lot to FLEFF as her statement shows.

Brianne describes her experience with FLEFF by saying:

The Finger Lakes Environmental Film Festival caught my eye as a freshman as simply a way to combine getting involved with my love for films. As I took my seat in the auditorium for my first intern meeting, I had no idea the overwhelming effect the festival would have on me over the next four years.

I started as an operations intern, learning the ropes, meeting guests, and watching how the festival operated. I also immersed myself in the content, from a deeply intense film about abortion in 1980's Romania to an incredibly inspiring documentary about refugee children in Uganda using dance as an escape from their war-torn lives. Needless to say, I walked away from the week immediately hooked on everything the festival had to offer.

The following year I worked as a team leader for FLEFF, leading the Blogging team, and am currently serving as an assistant to the internship coordinators for the 2011 edition of the festival.

I couldn't be more thrilled to have FLEFF landing, physically, back at Ithaca College and Cinemapolis once again. Every year, co-directors Dr. Patty Zimmerman and Dr. Tom Shevory, continue to surpass themselves in their selection of thought provoking and boundary pushing films, performances, and guest artists.

Essentially, I am involved with FLEFF because it makes me think. And it makes those around me think as well. And then we get to talk about it, with producers and directors of the films, no less!

I have still yet to find a place where so many diverse ideas are laid out to be revealed, discussed, argued about, and shared.  So often in college, we as students fall into weekly routines, focused on campus life and the grind of writing papers and taking tests. FLEFF brings something more to the table, and inspires us to look a little deeper and a little wider at the world we live in.