Posted by Kylee Roberts at 8:46PM 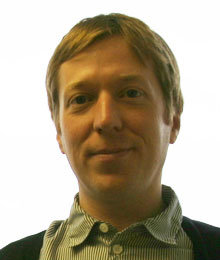 FLEFF’s environment is fueled by interdisciplinary conversations and events. They each engage audiences on the bigger topics derived from the theme and are influenced by the intersectionalities brought to the table.

The first thing I noticed in Dr. Andrew Utterson’s office on the third floor of the Roy H. Park School of Communication, was the large-framed 1926 poster from Buster Keaton’s The General. The army-green steam locomotive is accentuated by big wing-like-petals.

Dr. Andrew Utterson has been an Associate Professor of Media Arts, Sciences and Studies at Ithaca College since 2012 and not long after he joined the FLEFF team.

Dr. Utterson’s research includes international cinema, digital culture, media technology and more. He says FLEFF indulges his interests of technological developments in media because of the various venues that can give on-screen topics different contexts.

“There are lots of festivals that will have an online presence, exhibition of new media work, etc,” Dr. Utterson said. “But there are few that will bring it into a cinema, display it on a screen and have artist practitioners talk through that work and to see it in a very different environment.”

Dr. Utterson used to refer to himself as a “friend” of the festival in terms of collaborating and participating. He often moderated discussions, like Q&A sessions with filmmakers.

Dr. Utterson believes although the event includes entertainment on screen, it also houses an urgent dialogue about the films that seek to stimulate larger, important conversations. Moderating during FLEFF has continuously been a joy for him.

“A good moderator should be invisible to a certain extent and really play second fiddle to the audience of a particular screening or a participant of a lab or roundtable,” Dr. Utterson said. In wanting the guests to communicate their ideas with each other, he finds it rewarding when participants engage in a dialogue, which turn screenings into events.

This year, Utterson is building on several years of collaboration and participations of one kind or another. First, he will be working on leading the festival fellows mini course for students who want to be more involved with FLEFF. He is also a part of organizing FLEFF Lab Fridays and roundtable discussions.

In the past, scholars have been the primary point of attraction for the roundtable discussions. However, Dr. Utterson is working to make these discussions as interdisciplinary as FLEFF is itself, by seeking vibrant conversations between different practitioners.

“We talk about industries, plural, recognizing that there isn’t just one single homogenous industry,” Dr. Utterson said. “We think the most vital topics and exciting dialogues come from a heterogeneity and multiplicity of voices.”

As far as Disruptions go, Dr. Utterson believes the theme can be read in many different ways. From an active intervention to an existing aesthetic history, “new pioneering work can always be found in those terms,” he said, and in some ways can make disruptions exciting.