Posted by Hannah Basciano at 12:14AM 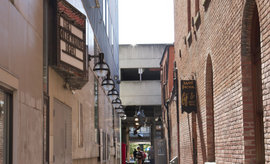 The four kinds of film festivals.

That was the first thing I learned in my time as a FLEFF blogger.

They are all so much more than just a collection of films!

Film festivals are places of interaction, whether between clients and consumers, filmmakers and narratives, or between the audience members themselves. Each festival has its position in the context of its creation. Some were created to host deals while others were national efforts to promote local art.

So where does FLEFF stand in this spectrum?

FLEFF is a thematic festival dedicated to education.

In addition to hosting films from all over the world, which expose local audiences to new forms of cultural understanding, FLEFF has renowned concerts, book launches, sought after lectures, theatrical performances, and most importantly: a unique habitat.

The Finger Lakes Environmental Film Festival creates an actual environment for its participants. A habitat. Conversation is sparked through the many topics presented. People then learn from each other, creating a dialogue of mutual discovery.

But does the discussion end there? No! FLEFF offers a variety of mini-courses  through Ithaca College that further student curiosity.

FLEFF doesn't just influence Ithaca college, however. Ithaca itself benefits greatly from the festival. Cinemapolis receives international business, while in turn the theater provides the perfect setting. Local restaurants and hotels  appreciate the extra population the festival generates, the city working with the festival to create the perfect habitat of intellectual and economic prosperity. It's a win-win situation!

I never realized how much of an impact FLEFF has on its environment, while creating one of its own, before I started to learn what goes on behind the scenes to make it so successful! What are the most important things I've learned about the festival so far?

1. FLEFF is a thematic festival focused on education. This year's theme is Habitats. To learn more about the theme, click here.

2. FLEFF creates an environment of its own, making it a real environmental festival.

3. There is so much more than films that the festival has to offer. Check all of it out!

4. If you're an Ithaca College student, take advantage of the mini-courses!

5. FLEFF has a huge impact on the Ithaca community, and the two work so well together to create the best and most prosperous festival!

Have you learned anything new about FLEFF?