Posted by Thomas Ball at 1:21PM 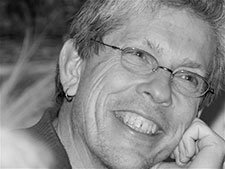 Norm Johnson has a problem. The FLEFF opening concert he directs is in little over a month and Dr. Patricia Zimmermann, his immediate boss, is out of the country. He tells me that he's missing an important piece of the concert, but cannot recall what.

His current project, a stage adaptation of Sense and Sensibility, runs throughout March and ends on the 31st, two weeks before the FLEFF concert. Johnson talked about using the original text from Jane Austin and building his shows around a series of choices with the text.

In the same way, the FLEFF concert integrates music, media and texts from a variety of mediums, and Johnson serves as, "traffic cop" organizing the ways in which the texts intersect one another. For instance he referenced the participation of multimedia producers Ann Michel and Phil Wilde. Their documentary and media productions play over sections of the concert each year.

Johnson points out that he never watches the footage in advance. Rather, he lets the creators and musicians find their interpretations of the theme for themselves. Once the talent prepares their contributions, Johnson arranges the different aspects of the event. Johnson designs the structure of the concert to create a sensory experience for the audience.

Part of Johnson's job forces him to, "close [his] eyes" in order to fully immerse himself in the concert experience.

The content of the festival remains plastic in order to compensate for any ideas that Johnson may conceive while developing the show. He debated whether or not to include music from the composer David Maslanka, for example. After Maslanka's death last year, Johnson decided to incorporate more of the composer's work into the show as a tribute.

In discussing the theme of geographies, Johnson recalled his experiences growing up in New England. He remembered the monuments to the pilgrims that landed there, and the rocky topography of the northeast. In leaving everything behind them, the colonists left themselves in constant peril.

Contrasting that with his experiences teaching in Portland, Johnson described tributes to the settlers who crossed the country to the west coast. He noticed the shift and the transformation of the statues to reflect the ongoing history of the United States. In noting this transformation, Johnson remarked that people's social structures reflect the locations in which they are based.

Following that, Johnson talked about how he experienced New York City. Walking around the streets of Manhattan made him imagine the island as a forest. For Johnson, the streets provided a sense of comfort that at times felt claustrophobic.

When I brought up that the theme of geographies including both real and imagined geographies, it triggered something in him. He remembered the missing element of the concert.

The missing element came in the form of a book. That book, titled Invisible Cities, describes many different imaginary cities. Some of the cities exist in the realm of possibility, and others do not, but every one comes from author Italo Calvino's imagination. None of them exist on Earth as we know it.

The text serves FLEFF as another piece of material to weave through the opening concert. As with all of the texts Johnson works with, the book presents a series of decisions for the director to make in the coming weeks.

I told Johnson that the FLEFF director had recently returned to Ithaca, which he did not know. As I left, he began composing a new email.