Off the Menu: Food as a Cultural and Historical Artifact

Posted by Gabriella LoBue at 12:31AM 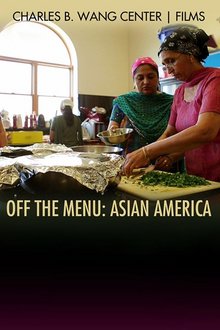 “Every dish has a storyline.” Korean-American filmmaker Grace Lee recalls that, as a child, Chinese restaurants were “Asian enough” for her immigrant parents, and “American enough” for her sister and herself. In recent years, however, Asian cuisine has grown as a favored taste of the American diet. Thus, Lee created Off the Menu: Asian America in order to discover if and how food defines individuals.

Lee’s fascination with food stems from the way it helps her understand community, family, and personal history. Specifically for the vast and complex history of Asian America, she was inspired to travel across the United States in search of answers that could confirm or deny her intuitions.

In a brief 56 minutes, Lee takes the audience to Texas, New York City, Wisconsin, and Hawaii. While documenting delectable and mouthwatering Asian cuisines from around the country, Lee observed people’s different uses of food. One man chose to capitalize upon a culinary opportunity, while two restaurant owners connected to the history and traditions of their Chinese heritage. A Sikh community implemented the mealtime experience as a part of a healing process, and Asian Pacific individuals use food to honor previous generations while simultaneously adapting to new cultures.

One of the subjects, Glen Gondo, president of Tokyo Gardens, Inc., owns over 189 locations in Texas alone. This Japanese eatery sells Chinese dishes and Vietnamese meals, while also experimenting with new tastes with the American palate in mind. Although Gondo seems to have largely deviated from selling traditional Japanese sushi, one audience member voiced his appreciation for the documentary not judging Gondo’s recreation of Asian cuisine and veering from authenticity.

Another audience member shared her thoughts during the post-screening discussion, and noted that she liked Lee’s gradual transition of taking pictures of the food to taking more pictures of the people at the Wisconsin Sikh temple. The community used cooking and meals as a part of healing after a white supremacist gunman attacked the temple in 2012. Taking photos of the people focused on the impact the food had on the community, especially as they continued to offer love and care despite the tragic event.

Someone else commented on Lee’s discovery in Hawaii that meals are the essence of skills. These abilities, which are required to prepare the food, are passed down from generation to generation. Cooking and harvesting serve as an account of history, and food can define individuals by its taste, appearance, and production.

This documentary shows how such a basic need for sustenance can blend the unique properties of different cultures, feed people spiritually, and serve as reminders of the constant evolution of cultures and histories. Furthermore, the true impact of this film lies in its dedication to uncover the potential of food as a social and bonding experience between individuals of all walks of life.