Posted by Blaize Hall at 9:39PM 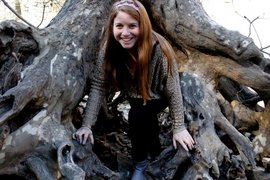 We meet in “the Pub” or IC Square, which is noisy and crowded with students having lunch, working on projects and studying.  She rushes over to the table, carrying a large school bag.  Leah Galant is a busy girl.

The first few minutes of our conversation consist of swapping stories of our jam-packed weeks,  with assignments due before Spring Break, and our multitude of other extracurricular commitments outside of FLEFF.

The FLEFF student positions have undergone much restructuring for the 2014 festival.  More clearly defined responsibilities for bloggers and interns has translated into a more concrete hierarchy of communication within the FLEFF staff. Leah works as the Assistant to the Internship Coordinator for FLEFF this year.

Leah serves as a liaison to the Internship Coordinator, and also works to aid the two Assistants to the Co-directors, Tiffani-Amber Muller, and Chenruo Zhang in their communications with the interns.  Leah fields questions from her peers, and is taking a role in planning the intern retreat, a training event for the intern team.

Leah has a history with FLEFF, having served as an intern and a team leader in past years.  She also works for the All American High School Film Festival as a volunteer coordinator.  “It’s been a really exciting experience to work for festivals, to help plan, to recruit volunteers, to promote them, and it’s so rewarding when it all comes together.  It’s really rewarding,” she said.

Future career goals for Leah involve combining her knowledge of film festivals with her passion for documentary work.  Last semester she worked on a student documentary called “Beyond the Wall” about a man recently released from the Auburn Correctional Facility after about twenty years .  The film examined what reintegration into society is like post-prison.  She and her team already sold the viewing rights to Cornell University and are currently submitting the film to festivals and waiting to hear back.

Documentary studies majors at Ithaca College have to acquire a minor to round out their education.  Leah studies sociology for her minor. She explained, “I think it’s a great combination with documentary film making.  In order to make something that you’re going to show the public, it’s important to have a sociological background so you’re not doing more injustice to the film.  If you are trying to make a film for social change, this understanding will help it actually be effective.”